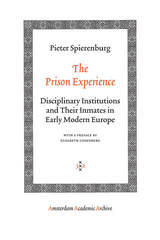 BUY
The Prison Experience: Disciplinary Institutions and Their Inmates in Early Modern Europe
by Pieter Spierenburg
preface by Elisabeth Lissenberg
Amsterdam University Press, 2007
Paper: 978-90-5356-989-4
eISBN: 978-90-485-0184-7
Though the prison is central to the penal system of most modern nations, many believe that imprisonment did not become a major judicial sanction until the nineteenth century. In this readable history, Pieter Spierenburg traces the evolution of the prison during the early modern period and illustrates the important role it has played as both disciplinary institution and penal option from the late sixteenth century onward.  Placing particular emphasis on the prisons of the Netherlands, Germany, and France, The Prison Experience examines not only the long-term nature of prisons and the historical conceptions of their prisoners but also looks at the daily lives of inmates—supplementing our understanding of social change and day-to-day life in early modern Europe.
AUTHOR BIOGRAPHY
Pieter Spierenburg is professor of historical criminology at Erasmus University in the Netherlands.
TABLE OF CONTENTS


Table of Contents - 10 Part One: The Origins - 20 1. Introduction A Process Approach to Prison History - 22 2. Idleness and Labor The Emergence of Prisons in Early Modern Europe - 33 Part Two: Prisoners and Forced Labor - 60 3. The Period of Experimentation Prison Workhouses on the Continent, 1588-1650 - 62 4. In the Margins of Settled Life Imprisonment and the Repression of Begging and Vagrancy - 90 5. Prisons and the Imagination The Public Image, the Miracles of St. Raspinus, and the Pumping Myth - 108 6. The Prison as a Household Management, Forced Labor, and the Economy - 126 7. Thieves, Prostitutes and Aggressors The Evolution of Imprisonment as a Penal Sanction - 156 8. The Prison Experience Internal Life from Above and from Below - 192 Part Three: Prisons and Family Discipline - 242 9. Elites and the Poor Private Confinement: The Environment - 244 10. Drunks, Revellers, and the Insane Private Confinement: The Prisoners - 259 Part Four: The Early Modern Legacy - 278 11. Crossroads Bondage and the Penal System in Western Europe - 280 12. Conclusion Imprisonment, Mentalities, and Social Change - 298 Notes - 304 List of Archival Sources - 338 Bibliography - 342 Index - 356