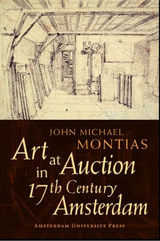 This book exploits a trove of original documents that have survived on the auctions organized by the Orphan Chamber of Amsterdam in the first half of the 17th century. For the first time, the names of some 2000 buyers of works of art at auction in the 29 extant notebooks of the Chamber have been systematically analyzed. On the basis of archival research, data have been assembled on the occupation of these buyers (most of whom were merchants), their origin (Southern Netherlands, Holland, and other), their religion, their year of birth, their date of marriage, the taxes they paid and other indicators of their wealth. Buyers were found to cluster in groups, not only by extended family but by occupation, religion (Remonstrants, Counter-Remonstrants) and avocation (amateurs of tulips and of porcelain, members of Chambers of Rhetoricians, and so forth). The subjects of the works of art they bought and the artists to which they were attributed (only the most important were attributed) are also analyzed. In the second part of the book on “Selected Buyers”, three chapters are devoted to art dealers who bought at auction and four to buyers who had special connections with artists, including principally Rembrandt. To forge a link between the cultural milieu of Amsterdam in this period and the buying public, two chapters are given over to buyers who were either poets themselves or were connected with contemporary poets. As a whole, the book offers a penetrating insight into the culture of the Amsterdam elite in the 17th century.
AUTHOR BIOGRAPHY
John Michael Montias (1928) was trained as an economist (Ph.D. Columbia University, 1958). In the first part of his career, he specialized in the comparison of economic systems. Since 1975, he has devoted most of his research to the art market in the 17th century Netherlands. His first book, Artists and Artisans in Delft; a Study of the Seventeenth Century, was published in 1982, his second, Vermeer and His Milieu: A Web of Social History, in 1989. Since then he has written a book in French on the art market in the Netherlands (Le marché de l'art aux Pays Bas, 15ème-18ème siècles, 1996) and, with John Loughman, a book on the hanging of pictures in 17th century Dutch houses (Public and Private Spaces; Works of Art in Seventeenth Century Dutch Houses, 2000).
TABLE OF CONTENTS


Table of Contents - 6Acknowledgements - 8Part I - The Auctions - 10 Introduction - 12 1 Orphan Chamber Auctions in Amsterdam - 16 2 How Auction Sales of the Orphan Chamber Were Conducted - 21 3 Extant Records of Auction Sales in Chronological Perspective - 28 4 Aggregate Statistics of Sales and the Owners of Goods Sold - 34 5 The Buyers at Auction Sales - 42 6 The Wealth of Buyers - 53 7 Clusters of Private Buyers - 58 8 Remonstrants and Counter-Remonstrants - 78 9 What Did They Buy and at What Prices? - 88 10 Attributions - 94 11 Echoes - 101 12 Concluding Words on Auctions - 109Part II - Profiles of Selected Buyers - 112 Introduction - 114 13 Art Dealers I: Artists and Merchants in the Trade - 115 14 Art Dealers II: Johannes de Renialme - 115 15 Art Dealers III: The Story of a Merchant Who Thought He Could Sell Paintings to a King - 145 16 Art Collectors and Painters I: Rubens’s Promise to Hans Thijsz. - 154 17 Art Collectors and Painters II: Jacob Swalmius and Rembrandt - 165 18 Art Collectors and Painters III: Marten van den Broeck and Rembrandt's Losses at Sea - 181 19 Art Collectors and Painters IV: Jan van Maerlen and His Extended Family - 189 20 Art Collectors and Painters V: Jean le Bleu, François Venant and Rembrandt's "Feast of Belshazzar" - 205 21 A Collector with Connections to Major Cultural Figures: Robbert van der Hoeve and the "Muiden Circle" - 210 22 What Santa Claus Brought to the Youth of Amsterdam - 221 23 When Sellers and Buyers Were Related: Elbert and Cornelis Symonsz. Pool, Jeltge Claes, and Pieter Claesz. Codde - 227 24 A Collector Who Held On to His Purchase for Over Fifty Years - 235 25 An Afterword on Mentalités - 244Bibliography - 248Published Sources - 250Notes - 258