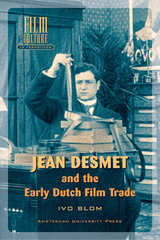 The Netherlands Film Museum's Desmet Collection contains the estate of Dutch cinema owner and film distributor Jean Desmet (1875-1956): almost nine hundred European and American films of all genres, a collection of publicity material, and a massive business archive. These three sources form the basis of this book, the first comprehensive reconstruction of Desmet's career. From his nomadic beginnings as a traveling showman to his successful switch to permanent cinema operation and film distribution, Blom shows how Desmet's fortunes encapsulated a series of structural changes within the new culture of the cinema.
AUTHOR BIOGRAPHY
Ivo Blom (1960) is assistant professor Film Studies at the Vrije Universiteit Amsterdam. Formerly an archivist and restorer at the Dutch Filmmuseum and teacher at the University of Amsterdam, he has published on early cinema in magazines such as IRIS, KINtop, 1895, Fotogenia and Film History and in collections including Sperduti nel buio (1991), A Second Life: German Cinema's First Decades (1996), Cabiria e il suo tempo (1998), A Nuova Luce (2000) and The Tenth Muse: Cinema and Other Arts (2001). In 2000 he finished his PhD-thesis on Jean Desmet and the early Dutch film trade and cinema exhibition.
TABLE OF CONTENTS