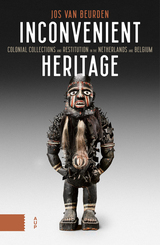 Inconvenient Heritage: Colonial Collections and Restitution in the Netherlands and Belgium
by Jos van Beurden
Amsterdam University Press, 2022
eISBN: 978-90-485-5711-0
The discussion about objects, human remains and archives from former colonial territories is becoming increasingly heated. Over the centuries, a multitude of items – including a cannon of the King of Kandy, power-objects from DR Congo, Benin bronzes, Javanese temple statues, M.ori heads and strategic documents – has ended up in museums and private collections in Belgium and the Netherlands by improper means. Since gaining independence, former colonies have been calling for the return of their lost heritage. As continued possession of these objects only grows more uncomfortable, governments and museums must decide what to do. How did these objects get here? Are they all looted, and how can we find out? How does restitution work in practice? Are there any appealing examples? How do other former colonial powers deal with restitution? Do former colonies trust their intentions? The answers to these questions are far from unambiguous, but indispensable for a balanced discussion.
AUTHOR BIOGRAPHY
Dr. Jos van Beurden ia a senior researcher colonial cultural collections and restitution (Free University, Amsterdam). Hist most recent publications are: Treasures in Trusted Hands – Negotiating the Future of Colonial Cultural Objects (Leiden 2017) (nominated for the NWO Boekman Dissertation Price), and The Return of Cultural and Historical Treasures – The Case of the Netherlands (Amsterdam 2012).
For his merits in the cultural heritage field, Van Beurden was appointed Officer in the Order of Orange Nassau. Jos van Beurden is founder of the news-clipping service RM* (restitution matters).


Preface
Two countries in one book – In search of a framework – About this research
Part I: A Decisive Phase in an Old Debate?
1. Choosing Colonial Collections
2. The Great Heritage Migration
3. Museums in Motion
4. The ‘Sans-Papiers’ of Colonialism
Part II: Thrifty Returns in the 1970s
5. Indonesia, the Netherlands and Diponegoro’s Kris
6. Congo, Belgium and Leopold’s Troublesome Legacy
7. Suriname, the Caribbean and the Netherlands: More Returns on the Way?
Part III: Recent Returns
8. The Campaign for M.ori Heads
10. Farewell to Over 18,000 Objects from the Museum Nusantara
11. Benin Dialogue Group: A Model for a European Approach?
Part IV: Private Collections – Less Visible, but Not Less Important
12. Missionary Organisations and Superfluous Collections
13. Colonial Objects in Trade and with Private Persons
Part V: Towards a New Ethics
14. Lessons from Settler Colonies and the Restitution of Nazi-looted Art
15. Trust, Equality and Justice
Acknowledgements
Consulted sources
Index