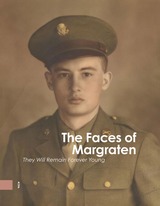 In the rolling hills of the Limburg Province, near the village of Margraten, they slowly loom up, row after row: thousands of white marble crosses and Stars of David. They mark the final resting place of American soldiers who died fighting to liberate the Netherlands during World War II. While the headstones provide the names and ages of those lost, they cannot tell us who these soldiers were, what their lives were like, or who they left behind. Nor can the peace and quiet at the only American military cemetery in the Netherlands reflect the harrowing experience and violent final moments of the men and women who forever rest here.

Through hundreds of personal photographs and more than 250 stories, The Faces of Margraten gives these soldiers faces and voices again, telling not only the history of World War II and the ending of the German occupation of the Netherlands, but also revealing how and why the Dutch people have never forgotten their liberators. Concluding with a list of all the soldiers’ names, this commemorative book stands as a testament to the service and sacrifice of the more than 10,000 Americans buried or memorialized as missing in Margraten.
AUTHOR BIOGRAPHY
The Fields of Honor Foundation remembers American soldiers who have lost their lives in World War II and who are either buried or memorialized as missing in Europe. The Netherlands-based nonprofit has compiled a database of more than 34,000 Americans who have been either buried in or listed at the Walls of the Missing at the overseas American War Cemeteries in Ardennes, Epinal, Henri-Chapelle, Lorraine, Luxembourg, and Margraten. By drawing on the extensive archive that the foundation’s volunteers have established, as well as by conducting additional research, including a range of outreach to American families and organizations, Jori Videc, Sebastiaan Vonk, and Arie-Jan van Hees compiled the touching stories of the soldiers remembered in The Faces of Margraten.
TABLE OF CONTENTS


A lasting monument in print
The American war effort in northwestern Europe: Uncle Sam comes to the rescue
The only American Cemetery in the Netherlands
The stories behind the names
Epilogue: Singing birds
Forever Grateful: Honor Roll
Glossary
Acknowledgements
They remember
Sources