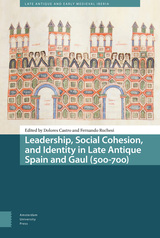 Leadership, Social Cohesion, and Identity in Late Antique Spain and Gaul (500-700)
edited by Dolores Castro and Fernando Ruchesi
Amsterdam University Press, 2023
eISBN: 978-90-485-5377-8
The replacement of the Roman Empire in the West with emerging kingdoms like Visigothic Spain and Merovingian Gaul resulted in new societies, but without major population displacement. Societies changed because identities shifted and new points of cohesion formed under different leaders and leadership structures. This volume examines two kingdoms in the post-Roman west to understand how this process took shape. Though exhibiting striking continuities with the Roman past, Gaul and Spain emerged as distinctive, but not isolated, political entities that forged different strategies and drew upon different resources to strengthen their unity, shape social ties, and consolidate their political status.
AUTHOR BIOGRAPHY
Dolores Castro is a postdoctoral research fellow at the National Scientific and Technical Research Council (CONICET) and assistant professor at Universidad de General Sarmiento, Argentina. Her current research explores the fields of religion and political power in Late Antiquity and the Early Middle Ages, with particular focus on the Visigothic period.

Fernando Ruchesi received his PhD at the Universidad de Buenos Aires in 2015. At present he works as a Researcher at the Universitat de Lleida, Spain. His research focuses on the development of social cohesion in Merovingian Gaul and Visigothic Spain, with particular emphasis on the Northeast of the Iberian peninsula.