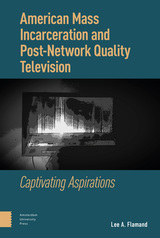 American Mass Incarceration and Post-Network Quality Television: Captivating Aspirations
by Lee Flamand
Amsterdam University Press, 2022
eISBN: 978-90-485-5368-6
Far more than a building of brick and mortar, the prison relies upon gruesome stories circulated as commercial media to legitimize its institutional reproduction. Perhaps no medium has done more in recent years to both produce and intervene in such stories than television. This unapologetically interdisciplinary work presents a series of investigations into some of the most influential and innovative treatments of American mass incarceration to hit our screens in recent decades. Looking beyond celebratory accolades, Lee A. Flamand argues that we cannot understand the eagerness of influential programs such as OZ, The Wire, Orange Is the New Black, 13th, and Queen Sugar to integrate the sensibilities of prison ethnography, urban sociology, identity politics activism, and even Black feminist theory into their narrative structures without understanding how such critical postures relate to the cultural aspirations and commercial goals of a quickly evolving TV industry and the most deeply ingrained continuities of American storytelling practices.
AUTHOR BIOGRAPHY
Lee A. Flamand, PhD is currently a Research Associate at Ruhr University Bochum.
TABLE OF CONTENTS