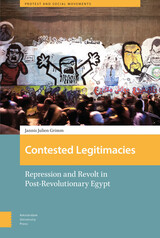 Contested Legitimacies: Repression and Revolt in Post-Revolutionary Egypt
by Jannis Julien Grimm
Amsterdam University Press, 2022
eISBN: 978-90-485-5345-7
Since the military overthrow of President Mursi in mid-2013, Egypt has witnessed an authoritarian rollback. Through a combination of repression and nationalist securitizing discourses, popular pressure for reform was successfully channelled into a state-centric model of governance. But despite state violence and the restriction of public spaces, protests have anything but ceased. Contested Legitimacies explores this resilience of protest despite unprecedented repression through an approach attuned to the physical and discursive interactions among key players in Egypt’s post-revolutionary arena. Starting with the successful Tamarod uprising against President Mursi, to the unsuccessful Islamist resistance against the military coup, to the Rabaa massacre and the shrinking spaces for protest under Al-Sisi’s authoritarian rule, to the resurgence of popular resistance in the shape the Tiran and Sanafir island campaign, it investigates the rise and fall of different coalitions of contenders and explores their impact on Egypt’s political transition.
AUTHOR BIOGRAPHY
Dr. Jannis Julien Grimm heads the research group "Radical Spaces" at Freie Universität Berlin’s Center for Interdisciplinary Peace Conflict Research (INTERACT). He is also an associated researcher and a member of the board at the Institute for the Study of Protest and Social Movements (ipb) in Berlin. His work centers on the dynamics of repression and social mobilization in the MENA region.
TABLE OF CONTENTS


Acknowledgments
Preface
1 Introduction
History in the Making
Interactionist Approaches and the Arab Uprisings
The Egyptian Revolution as the Result of a Hegemonic Crisis
Political Subjectivation and the Emergence of New Contentious Alliances
Situating this Project
2 Conceptual Choices and Theoretical Framework
Players and Arenas
Contentious Interactions at Critical Junctures
Making Events Transformative
A Discourse Theoretical Perspective on Contentious Politics
3 Brothers and Rebels
The Polarization of Egyptian society
Rebellion against Mursi
The June 30 Uprising
A Crisis of Legitimacy
4 Coup and Anti-Coup
From Government to Opposition
The Constitution of the Anti-Coup Alliance as Political Player
Constructing the Antagonist Other
The Republican Guard Massacre
A Popular Mandate for Repression
Setting Course for Violence
5 Myths and Martyrs
The Making of a Massacre
The Rabaa Salute
The Rabaa Martyrs
The backlash to the Rabaa Massacre
Tactical Adaptation
Discursive Path Dependencies
6 New Sheriff in Town
Anti-Coup Resistance from Abroad
Victors’ Justice
The Rehabilitation of the Armed Forces
Shrinking Spaces
A Winning Formula for Popular Support
7 A Tale of Two Islands
Reshaping the Protest Arena
The Limits of Securitization
The Popular Campaign to Protect the Land
Turning the Nationalist Discourse Inside Out
Harnessing the Memory of January 25 for Coalition Building
8 Conclusion and Implications
An Autocratic Restoration through the Lenses of Contentious Politics
From a Relational to an Interactionist Perspective on Protest-Repression-Dynamics
Conceptualizing the Discursive Arena of Contentious Politics
Prospects for Resistance
Appendix: A Mixed-Method Approach to the Study of Contentious Interaction
Combining Protest Event and Discourse Analyses in a Nested Research Design
Event Data and its Limitations
Political Discourse Analysis
Source Selection
Data Collection and Ethical Dilemmas
Bibliography