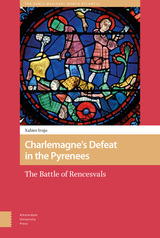 Charlemagne’s Defeat in the Pyrenees: The Battle of Rencesvals
by Xabier Irujo
Amsterdam University Press, 2021
eISBN: 978-90-485-5329-7
The Battle of Rencesvals is the one of the most dramatic historical event of the entire eighth century, not only in Vasconia but in Western Europe. This monograph examines the battle as more than a single military encounter, but instead as part of a complex military and political conquest that began after the conquest of the Iberian Peninsula in 711 and culminated with the creation of the Kingdom of Pamplona in 824. The battle had major (and largely underappreciated) consequences for the internal structure of the Carolingian Empire. It also enjoyed a remarkable legacy as the topic of one of the oldest European epic poems, La Chanson de Roland. The events that took place in the Pyrenean pass of Rencesvals (Errozabal) on 15 August 778 defined the development of the Carolingian world, and lie at the heart of the early medieval contribution to the later medieval period.
AUTHOR BIOGRAPHY
Xabier Irujo (Chair of the Center for Basque Studies, University of Nevada - Reno) holds three MAs in linguistics, history and philosophy and two PhDs in history and philosophy. He has lectured and published on topics related to Basque history.
TABLE OF CONTENTS


Preface
Precedents of the Battle
- The Paderborn Diet, 777
- The Marca Hispanica: A New Political project
The Campaign of 778
- March on Vasconia
- Siege and Capture of Pamplona
- At the Gates of Zaragoza
- Retreat and Destruction of Pamplona
The Battle of Errozabal in Light of the Frankish Sources
Consequences of the Battle
Impact of the Battle in the Medieval Tradition
- The Battle According to the Chanson de Roland
- The Battle as Described in the Historia Caroli Magni et Rotholandi
- Interpretation of the Stained-Glass Window of Chartres Cathedral
Epilogue
Appendix: Historical sources
Bibliography
Index