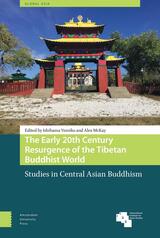 The Early 20th Century Resurgence of the Tibetan Buddhist World: Studies in Central Asian Buddhism
edited by Ishihama Yumiko and Alex McKay
Amsterdam University Press, 2022
eISBN: 978-90-485-5306-8
The Early 20th Century Resurgence of the Tibetan Buddhist World is a cohesive collection of studies by Japanese, Russian and Central Asian scholars deploying previously unexplored Russian, Mongolian, and Tibetan sources concerning events and processes in the Central Asian Buddhist world in the late 19th and early 20th centuries.
Set in the final days of the Qing empire when Russian and British empires were expanding into Central Asia, this work examines the interplay of religious, economic and political power among peoples who acknowledged the religious authority of Tibet's Dalai Lama. It focuses on diplomatic initiatives involving the 13th Dalai Lama and other Tibetan Buddhist hierarchs during and after his exile in Mongolia and China, as well as his relations with Mongols, and with Buriat, Kalmyk, and other Russian Buddhists. It demonstrates how these factors shaped historical processes in the region, not least the reformulations of both group identity and political consciousness.
+Pre-order from Rest of the World External Link
AUTHOR BIOGRAPHY
Professor Ishihama Yumiko is a tenured faculty member of the School of Education, Waseda University, Japan, and the author of the number of English and Japanese language articles in the field of Tibetan and Central Asian history.

Alex McKay is a retired lecturer and research fellow at London University SOAS, UCL, and the IIAS (Leiden). He is the author of 4 monographs, editor/co-editor of 5 collected works, and author of around 45 articles on Indo-Tibetan history.


Preface
INTRODUCTION (Alex McKay)
CH.1 (Ishihama Yumiko) The Impact of the 13th Dalai Lama’s Sojourn in Mongolia: Arousing the National Consciousness of Tibetan Buddhists from 1904 to 1908
CH. 2 (Wada Daichi) The Modern and Traditional Diplomacy of the 13th Dalai Lama, during his Sojourn in Khalkha and Qinghai (1904-1907)
CH. 3 (Tachibana Makoto) Friendship and Antagonism: Tibetans and Money in Early Twentieth Century Mongolia
CH. 4 (Sergius L. Kuzmin) The Tibet-Mongolia Political Interface in the First Half of the 20th Century.Data from Russian Archives
CH. 5 (Ishihama Yumiko and Takehiko Inoue)A Study of Three Tibetan Letters Attributed to Dorzhiev held by the St. Petersburg Branch of the Archive of the Russian Academy of Sciences
CH. 6 (Baatr U. Kitinov) The Russian Archival Documents on the Revitalization of Buddhism among the Kalmyks in the late 19th and early 20th centuries
CH. 7 (Takehiko Inoue) Buddhist Devotion to the Russian Tsar: the Bicultural Environment of the Don Kalmyk Sangha and Russian Orthodox Church in the 1830s
CH. 8 (Nikolay Tsyrempilov) Russian Tsar as Cakravartin: A Buriat Lama’s View of the Coronation of Nicholas II
CH. 9 (Hamugetu) The Struggle between Tradition and Modernity in the Early 20th Century of the Tibetan Buddhist World: a case study of the 7th lCang-skya’s activities from 1912-1957
BIBLIOGRAPHY
INDEX