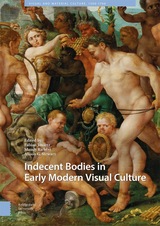 Indecent Bodies in Early Modern Visual Culture
edited by Fabian Jonietz, Mandy Richter and Alison Stewart
Amsterdam University Press, 2023
eISBN: 978-90-485-5177-4
The life-like depiction of the body became a central interest and defining characteristic of the European Early Modern period that coincided with the establishment of which images of the body were to be considered ‘decent’ and representable, and which disapproved, censored, or prohibited. Simultaneously, artists and the public became increasingly interested in the depiction of specific body parts or excretions. This book explores the concept of indecency and its relation to the human body across drawings, prints, paintings, sculptures, and texts. The ten essays investigate questions raised by such objects about practices and social norms regarding the body, and they look at the particular function of those artworks within this discourse. The heterogeneous media, genres, and historical contexts north and south of the Alps studied by the authors demonstrate how the alleged indecency clashed with artistic intentions and challenges traditional paradigms of the historiography of Early Modern visual culture.
AUTHOR BIOGRAPHY
Fabian Jonietz is a scholar at the Zentralinstitut für Kunstgeschichte in Munich, where he leads a research project on the pre-modern commemoration of animals. After receiving his Ph.D. in Art History (LMU Munich, 2012), he has been awarded various fellowships and held research and teaching positions in Germany, Italy, Switzerland, and the United States.

Mandy Richter works at the Kunsthistorisches Institut in Florenz – Max-Planck-Institut. In 2014, she received her Ph.D. in Art History and is the author of the monograph Die Renaissance der Kauernden Venus. Ihr Nachleben zwischen Aktualisierung und Neumodellierung von 1500 bis 1570 (Petersberg: Harrasowitz, 2016).

The research of Alison G. Stewart (Ph.D., Columbia University; Professor of Art History Emerita, University of Nebraska-Lincoln, since September 2020) has centred on sixteenth-century secular imagery. Her books include Before Bruegel and Crossroads. Her most recent work addresses Sebald Beham’s move away from Dürer’s Nuremberg to Frankfurt am Main.