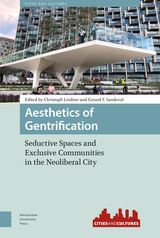 Aesthetics of Gentrification: Seductive Spaces and Exclusive Communities in the Neoliberal City
edited by Christoph Lindner and Gerard Sandoval
Amsterdam University Press, 2021
eISBN: 978-90-485-5117-0
Gentrification is reshaping cities worldwide, resulting in seductive spaces and exclusive communities that aspire to innovation, creativity, sustainability, and technological sophistication. Gentrification is also contributing to growing social-spatial division and urban inequality and precarity. In a time of escalating housing crisis, unaffordable cities, and racial tension, scholars speak of eco-gentrification, techno-gentrification, super-gentrification, and planetary-gentrification to describe the different forms and scales of involuntary displacement occurring in vulnerable communities in response to current patterns of development and the hype-driven discourses of the creative city, smart city, millennial city, and sustainable city.

In this context, how do contemporary creative practices in art, architecture, and related fields help to produce or resist gentrification? What does gentrification look and feel like in specific sites and communities around the globe, and how is that appearance or feeling implicated in promoting stylized renewal to a privileged public? In what ways do the aesthetics of gentrification express contested conditions of migration and mobility? Addressing these questions, this book examines the relationship between aesthetics and gentrification in contemporary cities from multiple, comparative, global, and transnational perspectives.
AUTHOR BIOGRAPHY
Christoph Lindner is Professor of Urban Studies and Dean of The Bartlett Faculty of the Built Environment at University College London, where he writes about cities, globalization, and social-spatial inequality.

Gerard F. Sandoval is an Associate Professor in the Department of Planning, Public Policy and Management at the University of Oregon. His research focuses on the roles of immigrants in community regeneration, the urban planning interventions of governments in low-income immigrant communities, and the transnational relationships that exist within immigrant neighbourhoods.

REVIEWS
"This collection of essays on the aesthetics of gentrification forces us to cast attention on a critical and largely unexamined topic: the physical and material aspects of gentrification and the ways they are employed to create exclusivity and trigger displacement. Using a transnational and comparative lens, the essays weave a compelling account of how the spatial terrains of gentrification are constructed but also counteracted around the world. The book brilliantly demonstrates that a focus on aesthetics should be at the core of our understanding of gentrification and displacement forces."
- Anastasia Loukaitou-Sideris, Distinguished Professor of Urban Planning, UCLA

"Three decades ago, urban theorists from Michael Sorkin to Susan Fainstein to Sharon Zukin warned of Disneyfying redevelopment that creates new urban spaces of consumption. Aesthetics of Gentrification picks up this story in a long overdue critical examination of how these places have evolved globally, the racism and othering that they foster, and voices that have emerged to counter this form of urbanization. In this powerful collection of essays, editors Christoph Lindner and Gerard Sandoval identify the seduction of gentrification's aesthetics, its power to exclude, and the activism that can change its course."
- Karen Chapple, Professor of City and Regional Planning, University of California, Berkeley

"From the visual politics of street art in Paris, through the location and design of office parks in California, to the gendered spaces created by CCTV cameras in India, this fascinating collection of essays travels through some of the newest spaces and practices of gentrification. Lindner and Sandoval have brought together a rivetingly diverse collection of essays that reveal the multifaceted impact of gentrification in contemporary cities."
- Alison Young, Francine V. McNiff Professor of Criminology, University of Melbourne

"The Aesthetics of Gentrification offers genuinely fresh thinking on a pervasive urban phenomenon, bringing together a diverse and distinctive collection of scholarly voices that push us to think differently about the representation, politics, strategies, and silences of contemporary urban change."
- David Madden, Co-Director of the Cities Programme, London School of Economics and Political Science
TABLE OF CONTENTS