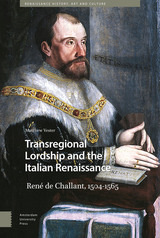 BUY
Transregional Lordship and the Italian Renaissance: René de Challant, 1504-1565
by Matthew Vester
Amsterdam University Press, 2020
eISBN: 978-90-485-5067-8
René de Challant, whose holdings ranged from northwestern Italy to the Alps and over the mountains into what is today western Switzerland and eastern France, was an Italian and transregional dynast. The spatially-dispersed kind of lordship that he practiced and his lifetime of service to the house of Savoy, especially in the context of the Italian Wars, show how the Sabaudian lands, neighboring Alpine states, and even regions further afield were tied to the history of the Italian Renaissance. Situating René de Challant on the edge of the Italian Renaissance helps us to understand noble kin relations, political networks, finances, and lordship with more precision. A spatially inflected analysis of René's life brings to light several themes related to transregional lordship that have been obscured due to the traditional tendencies of Renaissance studies. It uncovers an 'Italy' whose boundaries extend not just into the Mediterranean, but into regions beyond the Alps.
AUTHOR BIOGRAPHY
Matthew Vester is a Professor of History at West Virginia University and the author of Renaissance Dynasticism and Apanage Politics: Jacques de Savoie-Nemours, 1531-1585 (Truman State, 2012). He is the editor of Sabaudian Studies: Political Culture, Dynasty, and Territory (1400-1700) (Truman State, 2013) and co-editor of Tra Francia e Spagna: Reti diplomatiche, territori e culture nei domini sabaudi fra Tre e Settecento (Carocci, 2018).
TABLE OF CONTENTS


Abbreviations List of maps and tablesList of figuresAcknowledgmentsChapter 1 On the edge of the Italian RenaissanceThe Italian Renaissance The Renaissance nobility Spatial analysis and mobility Chapter 2 René's early career to 1536 René's early life René and Sabaudo-Swiss politics prior to 1536 The lordship of Valangin and the counts of Neuchâtel Before the storm, 1531-1534 Chapter 3 René's growing influence during the war years, 1536-1553 The invasions of 1536 Valangin, the Reform, and relations with the Countess of Neuchâtel Political leadership and mobility during a time of uncertainty Struggling for the sovereignty of Valangin, 1542-1565 Chapter 4 René and Duke Emanuel Filibert René and Emanuel Filibert Vercelli capture and efforts to get released The twilight of a career Family matters and René's last years Historiographic perspectives of René's life Chapter 5 Kinship and noble life Kin relations Relations with wives and children Nobles and domestic life Legal issues Chapter 6 The Challant political networks René's networks -The regional scope of René's ties -René's ecclesiastical network -René's key subordinates Mencia's network Letters and information Relations with officials Chapter 7 Finance and brokerage Nobles and finance René as borrower and broker -The financial situation inherited by René -1526-1536: Finance and Swiss negotiations -Finance during the war years to 1545 -From the 1545 'restructuring' to the second imprisonment The financial implications of ransom Financial recovery Chapter 8 Lordship Valangin during the war years Beaufremont René and the practice of lordship -Fiefs and fiscality -Sample castellany accounts: Châtillon, 1559-1560 -Administration of the fiefs Chapter 9 The embodiment of spatial politics Index