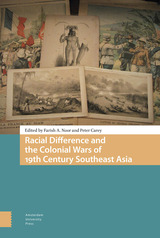 BUY
Racial Difference and the Colonial Wars of 19th Century Southeast Asia
edited by Farish Ahmad-Noor and Peter-Brian Ramsay Carey
Amsterdam University Press, 2020
eISBN: 978-90-485-5037-1
The colonisation of Southeast Asia was a long and often violent process where numerous military campaigns were waged by the colonial powers across the region. The notion of racial difference was crucial in many of these wars, as native Southeast Asian societies were often framed in negative terms as 'savage' and 'backward' communities that needed to be subdued and 'civilised'. This collection of critical essays focuses on the colonial construction of race and looks at how the colonial wars in 19th-century Southeast Asia were rationalised via recourse to theories of racial difference, making race a significant factor in the wars of Empire. Looking at the colonial wars in Java, Borneo, Siam, the Philippines, the Malay Peninsula and other parts of Southeast Asia, the essays examine the manner in which the idea of racial difference was weaponised by the colonising powers and how forms of local resistance often worked through such colonial structures of identity politics.
TABLE OF CONTENTS
Cover
Table of Contents
Farish A. Noor and Peter Carey
Peter Carey
Farish A. Noor
Yvonne Tan
David M. Malitz
Netusha Naidu
Brian Shott
Mesrob Vartavarian
Chronology of Major Events and Conflicts in Southeast Asia, 1800-1900
Contributors
Index