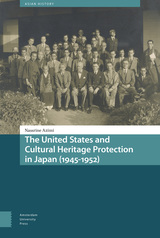 BUY
The United States and Cultural Heritage Protection in Japan (1945-1952)
by Nassrine Azimi
Amsterdam University Press, 2019
eISBN: 978-90-485-5010-4
One of the untold stories of the American military occupation of Japan, from 1945 to 1952, is that of efforts by the Arts and Monuments Division of the Supreme Commander for the Allied Powers (SCAP), for the preservation of Japan’s cultural heritage. While the role of Allies after WWII in salvaging the cultural heritage of Europe has recently become better known, not much is written of the extraordinary vision, planning and endeavors by curators and art specialists embedded in the US military and later based in Tokyo, and their peers and political masters back in Washington D.C. - all of whom ensured that defeated Japan’s cultural heritage was protected in the chaos and misery of post-war years.
AUTHOR BIOGRAPHY
[Nassrine Azimi](https://www.international.ucla.edu/japan/people/visitors/2215) PhD is special visiting professor at Hiroshima Shudo University, a former director and current senior advisor at the United Nations Institute for Training and Research (UNITAR), and the co-founder/coordinator of Green Legacy Hiroshima. She has published numerous books and opinion pieces in the international press on multi-cultural and post-conflict issues.
TABLE OF CONTENTS


AcknowledgementsForewordPreface Introduction: Occupation is not war Chapter I JAPAN'S CULTURE AND CULTURAL INSTITUTIONS BEFORE THE WAR, BRIDGES WITH THE UNITED STATES More than 36 views of Mount Fuji Encounters with the West Cultural fruits and frictions of the Meiji Restoration: The Iwakura Embassy Indispensable friendships at the Boston Museum of Fine Arts Ernest Fenollosa-the Boston-Japan bridge Okakura Tenshin-teacher and mentor Culture, the foundational stone? Chapter II PREREQUISITES FOR OCCUPATION-PLANNING THE U.S. POST-WAR POLICIES FOR JAPAN Building towards the Arts and Monuments Division Franklin D. Roosevelt's America and the New Dealers The American Defense-Harvard Group The American Council of Learned Societies (ACLS) The American Commission for the Protection and Salvage of Artistic and Historic Monuments in War Areas The Civil Affairs Training School (CATS) Chapter III 'UNDERSTANDING JAPAN' : THE JAPAN SPECIALISTS Scholarship influencing policy and the bureaucracy? Joseph C. Grew-contested dean of the 'Japan Crowd' George B. Sansom-supreme diplomat and supreme scholar Ruth Benedict-the enemy, too, is human Scholars and the Pacific War Chapter IVTHE SHAPE OF THE OCCUPATION A league onto its own SCAP, its leadership and structure Culture under the Occupation Chapter VTHE ARTS AND MONUMENTS DIVISION Culture within the Civil Information and Education (CIE) Section George L. Stout-Father of MFAA, Founder of A&M Langdon Warner-An idol returns Sherman E. Lee-How it all worked Expecting the worst, getting the best? Chapter VICONCLUSIONS Rethinking the 1950 Law for the Protection of Cultural Property Quo Vadis? Imaginable consequences ARCHIVAL DOCUMENTS, ILLUSTRATIONS, PHOTOS REFERENCES Primary Sources Publicly Accessible Primary Sources Secondary SourcesWebsites and General Reference Books/Dictionaries Formal InterviewsLibraries/Collections/Museums