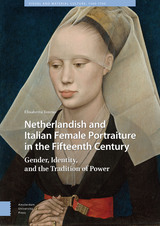 Netherlandish and Italian Female Portraiture in the Fifteenth Century: Gender, Identity, and the Tradition of Power
by Elisabetta Toreno
Amsterdam University Press, 2022
eISBN: 978-90-485-4489-9
This book investigates the aesthetic and conceptual characteristics of fifteenth-century female portraiture on panel. Portraits of women increased substantially during this century. They formed part of a material and a visual culture borne out of the rapid rise of an oligarchy from entrepreneurial activities that was especially advanced in the urbanised territories of Italy and Flanders. For this reason, the portraits in this book are by Netherlandish and Italian painters. They are simultaneously illustrative of the emancipation of the genre from its medieval idiom, and of the responses to the matrix of patriarchy, under which society was organised. Patriarchy is an androcentric structure that places women in a paradoxical situation of legal and social disenfranchisement on the account of purported psychophysical inadequacy, whilst making them the catalysts, through arranged marriages, for the success of the spheres of power, which are controlled by men. Thus, these portraits are also a window into women’s lives in this structure. This book is the first systematic study of their sign-system and of the feminine experience of seeing and being seen, at the intersection of disciplines that include art history, anthropology, legal history, philosophy. The surprising results suggest new interpretations of form and function in female portraiture, women’s active role in the imaging process and the early instances of a pro-women ideology.
AUTHOR BIOGRAPHY
Elisabetta Toreno is Lecturer and scholar in Art & Cultural History and in Philosophy of Art. She teaches at the Open University and has affiliations with the University of Glasgow and the Royal Conservatoire of Scotland.
TABLE OF CONTENTS