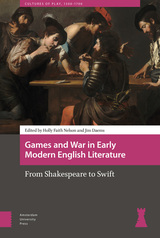 BUY
Games and War in Early Modern English Literature: From Shakespeare to Swift
edited by Holly Faith Nelson and James William Daems
Amsterdam University Press, 2019
eISBN: 978-90-485-4483-7
This pioneering collection of nine original essays carves out a new conceptual path in the field by theorizing the ways in which the language of games and warfare inform and illuminate each other in the early modern cultural imagination. They consider how warfare and games are mapped onto each other in aesthetically and ideologically significant ways in the plays, poetry, or prose of William Shakespeare, Thomas Morton, John Milton, Margaret Cavendish, Aphra Behn, and Jonathan Swift, among others. Contributors interpret the terms ‘war games’ or ‘games of war’ broadly, freeing them to uncover the more complex and abstract interplay of war and games in the early modern mind, taking readers from the cockpits and clowns of Shakespearean drama, through the intriguing manuals of cryptographers and the ingenious literary war games of Restoration women authors, to the witty but rancorous paper wars of the late seventeenth and early eighteenth centuries.
AUTHOR BIOGRAPHY
[Holly Faith Nelson](https://www.twu.ca/profile/holly-faith-nelson) is Professor and Chair of English and Creative Writing at Trinity Western University. She has published widely on the literature of the seventeenth and long eighteenth centuries, with a specialty in the literature of war.[Jim Daems](https://www.ucn.ca/profiles/Pages/Daems,Jim.aspx) is an Assistant Professor and Chair of the English Department at the University College of the North. He has published articles and books on a range of early modern and long-eighteenth century topics and authors.
TABLE OF CONTENTS


AcknowledgementsThe Interplay of Games and War in Early Modern English Literature: An IntroductionJim Daems and Holly Faith Nelson 'Can this cock-pit hold the vasty fields of France?' Cockfighting and the Representation of War in Shakespeare's Henry V Louise Fang Game Over: Play and War in Shakespeare's Troilus and Cressida Sean LawrenceThomas Morton's Maypole: Revels, War Games, and Trans-Atlantic Conflict Jim Daems Milton's Epic Games: War and Recreation in Paradise Lost David CurrellCiphers and Gaming for Pleasure and War Katherine EllisonVirtual Reality, Roleplay, and World Building in Margaret Cavendish's Literary War Games Holly Faith Nelson and Sharon AlkerDice, Jesting, and the 'Pleasing Delusion' of War-Like Love in Aphra Behn's The Luckey Chance Karol CooperWar and Games in Swift's The Battle of the Books and Gulliver's Travels.Lori A. Davis PerryTime-Servers, Turncoats, and the Hostile Reprint: Considering the Conflict of a Paper WarJeffrey GalbraithNotes on ContributorsIndex