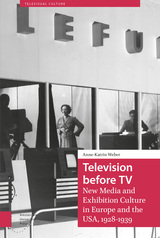 Television before TV: New Media and Exhibition Culture in Europe and the USA, 1928-1939
by Anne-Katrin Weber
Amsterdam University Press, 2022
eISBN: 978-90-485-4481-3
Television before TV rethinks the history of interwar television by exploring the medium’s numerous demonstrations organized at national fairs and international exhibitions in the late 1920s and 1930s. Building upon extensive archival research in Britain, Germany, and the United States, Anne-Katrin Weber analyses the sites where the new medium met its first audiences. She argues that public displays were central to television’s social construction; for the historian, the exhibitions therefore constitute crucial events to understand not only the medium’s pre-war emergence, but also its subsequent domestication in the post-war years. Designed as a transnational study, her book highlights the multiple circulations of artefacts and ideas across borders of democratic and totalitarian regimes alike. Richly illustrated with 100 photographs, Weber finally emphasizes that even without regular programmes, interwar television was widely seen.
AUTHOR BIOGRAPHY
Anne-Katrin Weber is a television historian with a special interest in non-institutional televisual uses and technologies. Her work is at the intersection of media history and archaeology, science and technology studies, and exhibition studies. She holds a PhD from the University of Lausanne, Switzerland, and is currently a NOMIS Fellow at eikones. Centre for the Theory and History of the Image (University of Basel). Her research has been published in English and French; she has edited several journal issues and volumes.
TABLE OF CONTENTS