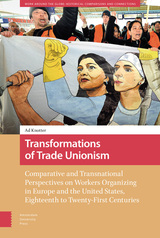 BUY
Transformations of Trade Unionism: Comparative and Transnational Perspectives on Workers Organizing in Europe and the United States, Eighteenth to Twenty-First Centuries
by Ad Knotter
Amsterdam University Press, 2018
eISBN: 978-90-485-4448-6
The historical experiences of workers organizing in Europe and the United States figure among the many forms of workers’ resistance resulting from the variety of labour relations in the global past. They cannot and will not be uniformly duplicated or copied from their present form in the global transformations of labour and workers’ movements that we are witnessing today. Nevertheless, in the twentieth century trade unionism as a form of collective agency among workers became a global phenomenon. With growing numbers of workers being exposed to wage labour and labour markets, the cases of workers organizing in the original heartlands of trade unionism in Europe and the United States can provide a historical background for future prospects and transformations. Based on comparisons of long-term developments and focusing on transnational connections, Transformations of Trade Unionism shows that historically there have been many varieties of trade unionism, emerging independently or transforming older ones, and that these varieties and transformations can be explained by specific and changing labour regimes. The case studies all start from Dutch examples, or incorporate a Dutch element, but the comparative and transnational approach connects these histories to general developments in Europe and United States from the eighteenth to the twenty-first century.This publication was made possible thanks to the generous financial support of the Stichting Unger - van Brero Fonds
AUTHOR BIOGRAPHY
Ad Knotter is Emeritus Professor of Comparative Regional History at Maastricht University, the Netherlands, and Research Fellow at the International Institute of Social History in Amsterdam.
TABLE OF CONTENTS


List of illustrationsList of tables and appendicesList of acronymsIntroductionChapter 1An international of insolence: the great anger of the cloth shearers in north-western Europe in the eighteenth centuryChapter 2Transnational cigar-makers: cross-border labour markets, strikes, and solidarity at the time of the First International (1864-1873)Chapter 3From artisanal associations to collective bargaining agents: two phases of early trade unionism in Amsterdam (1864-1894)Chapter 4Trade unions and workplace organization: regulating labour markets in the Belgian and American flat-glass industry and in the Amsterdam diamond industry (c. 1880-1940)Chapter 5From placement control to control of the unemployed: trade unions and labour market intermediation in western Europe in the nineteenth and early twentieth centuriesChapter 6The transnational origins of Dutch miners' unionism: a case study in the nationalization of labour movements (1907-1926)Chapter 7Justice for Janitors goes Dutch. Precarious labour and trade union response in the cleaning industry (1988-2012): a transnational historyConclusion: past and future transformationsBibliographyIndex