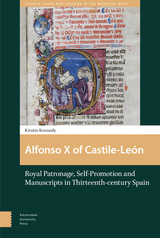 BUY
Alfonso X of Castile-León: Royal Patronage, Self-Promotion and Manuscripts in Thirteenth-century Spain
by Kirstin Kennedy
Amsterdam University Press, 2019
eISBN: 978-90-485-4138-6
Today, the literary patronage of Alfonso X 'the Learned' of Castile (1252-1284) seems extraordinary for its time in the context of Europe. His cultural programme, which promoted his royal status and imperial ambitions, was hugely ambitious, and the paucity of information about the intellectual circumstances in which it took place magnifies the scope of Alfonso's achievements still further. This book argues that rather than providing a new cultural template for his kingdoms, Alfonso did little to promote institutional learning and preferred instead to direct the literary works he commissioned to a restricted, courtly audience who would understand the complex layers of symbolism in the representations of him that accompanied the texts. Despite this careful control, this book cites codicological and paleographical evidence to show that some codices traditionally ascribed to the royal scriptorium were copied at the behest of readers beyond the king's immediate circle.
AUTHOR BIOGRAPHY
[Kirstin Kennedy](https://vam.academia.edu/KirstinKennedy) is a curator of metalwork (specializing in silver) at the Victoria and Albert Museum, London. She previously held a British Academy Post-Doctoral Fellowship at King's College London, in the Department of Spanish and Spanish American Studies (2000-2003).
TABLE OF CONTENTS


AcknowledgmentsList of figuresAbbreviationsIntroduction: 'the king makes a book'1. Alfonso X, his Literary Patronage and the Verdict of Historians2. Alfonso in his Texts: literary models and royal authorship3. Reality, Politics and Precedent in Images of Alfonso 4. Codices Laid Out for a King: the appearance and production of Alfonsine manuscripts5. The Circulation of Alfonsine Texts: astrological works and chroniclesConcluding RemarksManuscript SourcesIndex