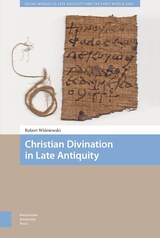 BUY
Christian Divination in Late Antiquity
by Robert Wisniewski
Amsterdam University Press, 2020
eISBN: 978-90-485-4101-0
In Late Antiquity, people commonly sought to acquire knowledge about the past, the present, and the future, using a variety of methods. While early Christians did not doubt that these methods worked effectively, in theory they were not allowed to make use of them. In practice, people responded to this situation in diverse ways. Some simply renounced any hope of learning about the future, while others resorted to old practices regardless of the consequences. A third option, however, which emerged in the fourth century, was to construct divinatory methods that were effective yet religiously tolerable. This book is devoted to the study of such practices and their practitioners, and provides answers to essential questions concerning this phenomenon. How did it develop? How closely were Christian methods related to older, traditional customs? Who used them and in which situations? Who offered oracular services? And how were they treated by the clergy, intellectuals, and common people?
TABLE OF CONTENTS
Cover
List of Abbreviations
Figures
Introduction
1. Attitudes to Divination
2. Prophets
3. Take and Read
Table 1. The numbers of extant scrolls and codices with the texts of the Hebrew Bible, Greek Old and New Testament, and the Homeric poems (based on Leuven Database of Ancient Books: https://www.trismegistos.org/ldab/).
Fig. 1. Codex of the Gospel of St. John, known as St. Cuthbert’s Gospel of St. John
4. Books and Bones
Fig. 2. The beginning of the Sortes Sanctorum in the ninthcentury codex of Metz
Fig. 3. A stele with oracular text found in Kremna (modern Çamlık, formerly Girme) in Pisidia
Fig. 4. Astragaloi (knucklebones), used, alongside dice, to choose an answer from oracular texts
Fig. 5. The Gospel of the Lots of Mary, written in Sahidic (sixth century)
Fig. 6. A page from the Codex Bezae with the beginning of the Gospel of St. John
5. Divinatory Lots
Fig. 7. Oracular ticket from Antinoë discovered on 21 October 1984 at East Kom
Fig. 8. Oracular ticket from Antinoë, still folded and tied with a string
6. Interrogating Demoniacs
7. Incubation
Conclusions
Bibliography
Index