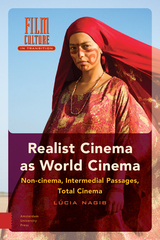 "With a rare combination of depth and range, Lúcia Nagib reframes the debate about realism in cinema by connecting it with a world cinema framework and looking at the work of directors as diverse as Abderrahmane Sissako, Edgar Reitz, Wim Wenders, Mizoguchi Kenji and Lucchino Visconti through the lens of the concept of intermediality. In this lucid and beautifully written tour de force of a book, Nagib offers fascinating new readings of classical works of cinema and extends an exciting invitation to film scholars and the broader public to think differently about possible new pathways to and through the history of film as an art form".
- Vinzenz Hediger, Professor of Cinema Studies, Goethe Universität Frankfurt&p[url]=https://www.bibliovault.org/BV.book.epl?ISBN=&&p[images][0]=https://www.bibliovault.org/thumbs/978-90-485-3921-5-thumb.jpg','sharer','toolbar=0,status=0,width=548,height=325');" href="javascript: void(0)">