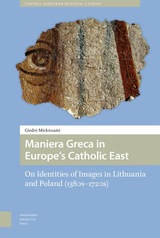 How and why does vernacular art become foreign? What does ‘Greek manner’ mean in regions far beyond the Mediterranean? What stories do images need? How do narratives shape pictures? The study addresses these questions in Byzantine paintings from the former Grand Duchy of Lithuania, contextualized with evidence from Poland, Serbia, Russia, and Italy. The research follows developments in artistic practices and the reception of these images, as well as distinguishing between the Greek manner – based on visual qualities – and the style favoured by the devout, sustained by cults and altered through stories. Following the reception of Byzantine and pseudo-Byzantine art in Lithuania and Poland from the late fourteenth through the early eighteenth centuries, Maniera Greca in Europe’s Catholic East argues that tradition is repetitive order achieved through reduction and oblivion, and concludes that the sole persistent understanding of the Greek image has been stereotyped as the icon of the Mother of God.
AUTHOR BIOGRAPHY
Giedré Mickunaite focuses on temporal dimensions of pictorial and verbal imagery. She explores structures of cultural legacy and regards oblivion as a vehicle in production of late medieval and early modern culture. Since 2003, Mick.nait. teaches and carries art historical research at the Vilnius Academy of Arts in Lithuania.
TABLE OF CONTENTS