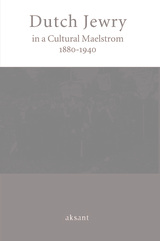 Not only the Jews but Dutch society at large was caught up in a cultural maelstrom between 1880 and 1940. In failing to form a separate pillar in a period when various population groups were doing just that, the Jews were certainly unlike contemporary Catholics or Protestants. In fact, the Jews were not trying to gain entrance in a pre-existing culture but were involved with non-Jews in constructing a new culture. The complexity of Dutch Jewish history once again becomes evident if not new.