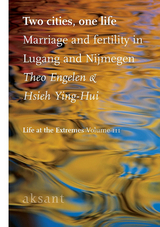 BUY
Two Cities One Life: The Demography of Lu-Kang and Nijmegen, 1850-1945
by Theo Engelen and Hsieh Ying-Hui
edited by J. de Jong and W. Koetsenruijter
Amsterdam University Press, 2008
eISBN: 978-90-485-2101-2
Paper: 978-90-5260-214-1
Historical processes are the result of the behavior of countless individual actors. In this book, therefore, the authors compare the demography of the Taiwanese town Lugang and the Dutch town Nijmegen using data on the lifes of thousands of their inhabitants. The period covered is approximately 1850 to 1945. First, the standard demographic rates on nuptiality, fertility and mortality are calculated to test the Malthusian predictions on a so called ‘positive’ and a ‘preventive’ demographic regime. Next, the authors try to disentangle the individual rationality behind aggregated measures in order to find out how the inhabitants of the two towns used the one life they had. Unaware of each others existence, the people living in Nijmegen and Lu-kang had more in common than one would expect given the huge cultural differences.

Two cities, one life is the third volume in the series Life at the Extremes: The Demography of Europe and China, edited by Chuang Ying-chang (Academia Sinica, Taiwan), Theo Engelen (Radboud University Nijmegen, the Netherlands), and Arthur P. Wolf (Stanford University, U.S.A.).