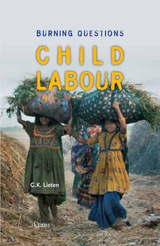 BUY
Child Labour: Burning questions
by Georges Kristoffel Lieten
edited by H. Jansen, J. de Jong and W. Koetsenruijter
Amsterdam University Press, 2005
Paper: 978-90-5260-185-4
eISBN: 978-90-485-2099-2
It is often said that children have always been working. With the onset of the industrial revolution in the nineteenth century, however, children became to be exploited under miserable circumstances in factories. That was the beginning of the movement against child labour. A worldwide awareness campaign has brought international organizations and governments to the position that child labour should urgently be replaced by child education. The objectives seem simple and laudable but the issues involved are very complex. What actually is child labour, and what is childhood? How many child labourers are there in the world? Is child labour restricted to developing countries or is it frequently used in order to stigmatize the non-Western world? Is regulation of labour conditions the solution or should governments and civil society one opt for a radical ban? Is there a role for corporate social responsibility? These questions have been addressed in the professorial address on Child Labour Studies. It is argued that much more research is needed and that particular care should be taken to learn from children on how they view the world and what they think of work, labour and education.
TABLE OF CONTENTS