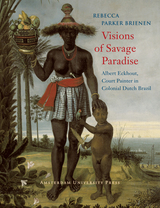 BUY
Visions of Savage Paradise: Albert Eckhout, Court Painter in Colonial Dutch Brazil
by Rebecca Brienen
Amsterdam University Press, 2006
eISBN: 978-90-485-0554-8
Paper: 978-90-5356-947-4
Visions of Savage Paradise is the first major book-length study of the Dutch artist Albert Eckhout to be published since 1938. This book, which draws extensively on the author’s doctoral dissertation, examines the fascinating works of art produced by Eckhout while he was court painter in Dutch Brazil to the German count Johan Maurits van Nassau-Siegen.Johan Maurits, who was colonial governor from 1637-1644 of the Dutch West India Company’s Brazilian colony, supported the study and representation of natural history as part of a program to document the different peoples and natural resources present in the colony. As part of this project, Eckhout created life-size paintings of Amerindians, Africans, and peoples of mixed “racial” background for display in Vrijburg, the governor’s palace. He also made still-life paintings and hundreds of chalk sketches and oil studies on paper of the “savage”peoples, plants, and animals of his new Brazilian home.In this study, the author provides a careful analysis of these works of art, framing them with a discussion of contemporary artistic practices in the Dutch Republic. Nonetheless, the primary focus of this book is the function of these works within their original colonial context. As the author makes clear, the creation, use, and display of the Brazilian paintings and drawings by Albert Eckhout strengthened Johan Maurits’s position as a colonial and cultural leader.This work will not only be of interest to students and scholars of seventeenth-century Dutch art, but it will also be an important resource for those interested in visual anthropology and the history of the WIC.
AUTHOR BIOGRAPHY
Rebecca Parker Brienen is an Assistant Professor of Art History at the University of Miami. She has received fellowships from the Fulbright Foundation and the Kress Foundation. Her publications on early modern visual culture include articles and catalog essays on the German naturalist-illustrator Georg Macgraf and the Dutch artists Frans Post and Albert Eckhout. In addition to a new project on images of slavery in the Caribbean in the 18th century, she is currently editing a collection of essays on images of the Conquest of Mexico.
TABLE OF CONTENTS