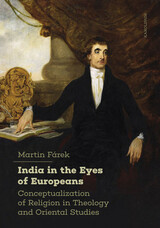 In India in the Eyes of Europeans, Martin Fárek argues that when Western scholars interpret Indian traditions, they actually present distorted reflections of their own European culture, despite their attempts at unbiased objectivity. This distortion is clearest in the way India is viewed primarily through a religious lens—a lens fashioned from an implicitly Christian design. While discussing the current international dialogue on the topic and the work of such scholars as S. N. Balagangadhara, Fárek’s study presents the results of original research on several key topics: the problems in assigning religious significance to the Indian traditions that gave rise to Hinduism and Buddhism; Europeans’ questioning of Indians’ historical consciousness; the current debate surrounding the arrival of the Aryans in India; and controversial interpretations of the work of the reformer Rammohan Raj. The result is a provocative study that should prove fascinating to Indologists, theologians, anthropologists, and anyone interested in the history of thought.
AUTHOR BIOGRAPHY
Martin Fárek is associate professor in the Department of Geography at the Technical University of Liberec, the Czech Republic.
REVIEWS
“It is not a simple task to analyze the representations of Indian culture in the works of European scholars over centuries and to offer new perspectives in this regard. Martin Fárek has found the necessary scientific courage to do so and he has undertaken this challenge with admirable erudition.”


Acknowledgments
A Note on the Transliteration of Indian Words and on the Translation from Czech
Introduction
How Do Europeans Approach the Otherness of Indian Traditions?
Paradigms and Theories in the Study of Indian Culture
The Problematic Concept of Religion
The Research Questions and Steps
Europeans’ Search for Religion in India
The Czech Understanding of Indian Traditions
Definition Problems in “Endless” Discussions about Hinduism
Was Buddhism a Protest against the Brahminical Orthodoxy and the Castes?
Intermezzo: Language Usage, Theories, and Metastructure of Ideas
Orientalists Continue with Theological Questions
Theories and Observations
Search for the “Primitive” Monotheism in India and Its Consequences
Religion, Historiography, and Indian Past
The Legacy of Christian Thought in Historiography
History of India Written by Europeans
The Truth of History Versus the Truth of Stories
Changing Interpretations of the Aryans
What Did Archaeology Prove?
Physical Anthropology and the Racial Theory
From the “Brahminical Invasion” to the Aryans
Did Ram Mohan Roy Understand Western Religion?
Problems in the Debate about Roy’s Ideas of Religion
Western Monotheistic Framework Accepted . . .
. . . but not Understood: “Good Idolatry” and “Evil in the Name of God”
The Traditional Indian Framework of Roy’s Thoughts
Conclusions
Bibliography
Index