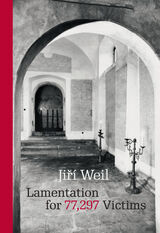 “Smoke from nearby factories shrouds a countryside as flat as a table, a countryside stretching off to infinity. Covering it are the ashes of millions of dead. Scattered throughout are fine pieces of bone that ovens were not able to burn. When the wind comes, ashes rise to the heavens, bone fragments remain on the ground. And rain falls on the ashes, and rain turns them to good fertile soil, as befits the ashes of martyrs. And who can find the ashes of those from my native land, of whom there were 77,297? I gather some ashes with my hand, for only a hand can touch them, and I pour them into a linen sack, just as those who once left for a foreign country would gather their native soil so as never to forget, so as always to return to it.”
​
So begins Jiří Weil’s unforgettable prose poem, Lamentation for 77, 297 Victims, his literary monument to the Czech Jews killed during the Holocaust. A Czech-Jewish writer who worked at Prague’s Jewish Museum both during and after the Nazi Occupation—he survived the Holocaust by faking his own death and hiding out until the war had ended—Weil wrote Lamentation while he served as the museum’s senior librarian in the 1950s. This remarkable literary experiment presents a number of innovative approaches to writing about a horror many would deem indescribable, combining a narrative account of the Shoah with newspaper-style reportage on a handful of the lives ended by the Holocaust and quotes from the Hebrew Bible to create a specific and powerful portrait of loss and remembrance. Translated by David Lightfoot, Lamentation for 77,297 Victims is a startling and singular introduction to a writer whose works have been acclaimed by Philip Roth, Michiko Kakutani, and Siri Hustvedt.
AUTHOR BIOGRAPHY
Jiří Weil (1900-1959) was a Holocaust survivor and the author of Life with a Star and Mendelssohn Is on the Roof. David Lightfoot is a librarian at St. Michael’s Hospital in Toronto.
REVIEWS
“Jiri Weil was a writer who witnessed the worst of this century and testified to his experience in works of unflinching and astonishing literary vision.” Larry Wolf, NYU, in the New York Times


“The harsh criticism Weil received throughout his life reflected his originality and his refusal to fit into received categories.”Jonathan Bolton, Harvard University, in the Yivo Encyclopedia of Jews in Eastern Europe