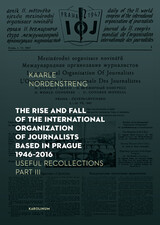 In this book, Finnish scholar Kaarle Nordenstreng provides a unique account of the Prague-based International Organization of Journalists, a group that was at one time the world’s largest media association. The IOJ expanded from a postwar fraternity of professional journalists in twenty countries to a truly global organization that had its hand in running journalism schools, a publishing house, a conference service, and a number of commercial enterprises in Czechoslovakia. Though the Cold War kept most Western journalists’ unions isolated from the organization, the IOJ was a major player in Communist Eastern Europe--at its peak in the late 1980s, the IOJ counted 300,000 journalists as members. Nordenstreng--who served as president of the IOJ for fourteen years--illuminates this exciting and little-explored chapter in the history of postwar Europe, from the rise of the Iron Curtain through the post-Soviet 1990s. He enlivens his firsthand account with personal testimonies from former IOJ members and a wealth of previously unpublished internal documents.
AUTHOR BIOGRAPHY
Kaarle Nordenstreng is professor emeritus of journalism and mass communication at the University of Tampere, Finland.