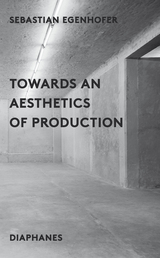 Throughout the twentieth century, art history has been too narrowly focused on formalism. As a result, analyses regularly reduced works of art to their materials, texture, and composition. By contrast, art historian Sebastian Egenhofer takes Gilles Deleuze’s readings of Spinoza, Nietzsche, and Bergson as the basis for a new resistance to the overly reductive account of art history.

After laying out his argument for a new aesthetics of production in introductory chapters that discuss the work of Spinoza, Nietzsche, and Bergson, as well as Heidegger and Kant, Egenhofer applies this theoretical framework to case studies on Michael Asher, Marcel Duchamp, Thomas Hirschhorn, and Piet Mondrian. An aesthetics of production does not, he argues, imply a nostalgia for the artisanal or for a work of art’s singularity, but a way to bring together elements of critical materialism with a thorough reevaluation of the modern art and abstraction.
AUTHOR BIOGRAPHY
Sebastian Egenhofer is professor of art history at the University of Vienna, where his work focuses on modern and contemporary art, phenomenology, and Marxist critical theory. James Gussen is a Boston-based translator and a former lecturer in French and German language and literature at Harvard University.
TABLE OF CONTENTS


Introduction
Mirrorings of Intensity
The Place of the Image in Neo-Plasticism
Casting and Projection: The Readymades and the Large Glass
An Introduction to Thomas Hirschhorn’s Spinoza Monument
Time and Visibility in the Work of Michael Asher
On the Concept of Truth Production: Heidegger with Spinoza
List of Illustrations