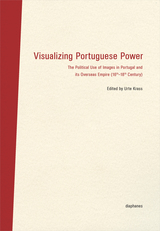 Images play a key role in political communication and the ways we come to understand the power structures that shape society. Nowhere is this more evident than in the process of empire building, in which visual language has long been a highly effective means of overpowering another culture with one’s own values and beliefs.

With Visualizing Portuguese Power, Urte Krass and a group of contributors examine the visual arts within the Portuguese empire between the sixteenth and eighteenth centuries. With a focus on the political appropriation of Portuguese-Christian art within the colonies, the book looks at how these and other objects could be staged to generate new layers of meaning. Beyond religious images, the book shows that the appropriation of the visual arts to reinforce important political concepts also took place in the outside the religious sphere, including adaptations of local artistic customs to reinforce Portuguese power.
AUTHOR BIOGRAPHY
Urte Krass is assistant professor in the Institute for Art History at the Ludwig Maximilian University of Munich.
TABLE OF CONTENTS

Urte Krass
Visualizing Portuguese Power: Between Imperial Agenda and Agency of the Image. An Introduction

Carla Alferes Pinto
Artistic Images and Objects as Agents of Politics and Religion: The Foundation Stone of the Convent of Saint Monica in Goa and the Processional Standard with the Miracle of the Crucified Christ

Márcia Almada
Calligraphy and Royal Symbols: An Analysis of Portuguese and Brazilian Painted Manuscripts in the 18th Century

Barbara Karl
Allegory and Narrative: Two Bengal Colchas and the Independence of Portugal

Urte Krass
Loyalty Made Visible: Pyrotechnices and Processions for King John IV in Macao in 1642

Giuseppe Marcocci
Stones of Contention: Factions, Statues, and the Political Use of Memory in Early Modern Goa

Giuseppina Raggi
Building the Image of the Portuguese Empire: The Power of Quadratura Painting in Colonial Brazil

Ines G. Županov
From Descriptive/Verbal to Pictorial Visualizations: Appropriating Nature in the Portuguese Empire in Asia (16th and 17th Centuries)