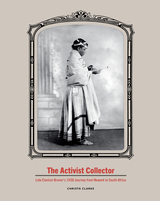 “After twenty-eight years of desire and determination, I have visited Africa, the land of my forefathers.” So wrote Lida Clanton Broner (1895–1982), an African American housekeeper and hairstylist from Newark, New Jersey, upon her return from an extraordinary nine-month journey to South Africa in 1939. This epic trip was motivated not only by Broner’s sense of ancestral heritage, but also a grassroots resolve to connect the socio-political concerns of African Americans with those of black South Africans under the segregationist policies of the time. During her travels, this woman of modest means circulated among South Africa’s black intellectual elite, including many leaders of South Africa’s freedom struggle. Her lectures at black schools on “race consciousness and race pride” had a decidedly political bent, even as she was presented as an “American beauty specialist.”

How did Broner—a working class mother—come to be a globally connected activist? What were her experiences as an African American woman in segregated South Africa and how did she further her work after her return? Broner’s remarkable story is the subject of this book, which draws upon a deep visual and document-ary record now held in the collection of the Newark Museum. This extraordinary archive includes more than 150 objects, ranging from beadwork and pottery to mission school crafts, acquired by Broner in South Africa, along with her diary, correspondence, scrapbooks, and hundreds of photographs with handwritten notations.

Christa Clarke is an independent curator and art historian. Previously she was senior curator of Arts of Global Africa at the Newark Museum of Art, where her work was supported with major grants from the Andrew Mellon Foundation and the National Endowment of Humanities. Her books include Representing Africa in American Art Museums (2011, co-edited with Kathleen Berzock), the award-winning African Art at the Barnes Foundation (2015), and Arts of Global Africa: The Newark Museum Collection (2018).


1 A Transatlantic Friendship
2 From Personal Pilgrimage to Political Purpose
3 “Welcome to Africa!”
4 Onward and Inward to the Transvaal and Natal
5 Return to the Eastern Cape and Voyage Home
6 Activist Exhibitions
7 The Newark Museum and Beyond
Epilogue “Mother of the Oceans”