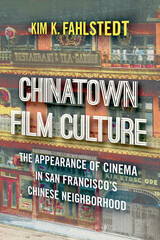 Chinatown Film Culture provides the first comprehensive account of the emergence of film and moviegoing in the transpacific hub of San Francisco in the early twentieth century. Working with materials previously left in the margins of grand narratives of history, Kim K. Fahlstedt uncovers the complexity of a local entertainment culture that offered spaces where marginalized Chinese Americans experienced and participated in local iterations of modernity. At the same time, this space also fostered a powerful Orientalist aesthetic that would eventually be exported to Hollywood by San Francisco showmen such as Sid Grauman. Instead of primarily focusing on the screen-spectator relationship, Fahlstedt suggests that immigrant audiences' role in the proliferation of cinema as public entertainment in the United States saturated the whole moviegoing experience, from outside on the street to inside the movie theater. By highlighting San Francisco and Chinatown as featured participants rather than bit players, Chinatown Film Culture provides an historical account from the margins, alternative to the more dominant narratives of U.S. film history.
AUTHOR BIOGRAPHY
KIM K. FAHLSTEDT is a postdoctoral scholar at Stockholm University's Media Studies Department and a research affiliate for the Swedish Institute for North American Studies at Uppsala University.
REVIEWS
"Chinatown Film Culture is an impressive and exhaustively researched history of early film exhibition practices and filmgoing culture in San Francisco's Chinatown. It is a remarkable contribution to film history!"
— Philippa Gates, author of Criminalization/Assimilation: Chinese/Americans and Chinatowns in Classical Hollywood Film

— Zhang Zhen, editor of The Urban Generation: Chinese Cinema and Society at the Turn of the Twenty-First Century


Contents
Preface
Introduction
Part I: Early Film in San Francisco
1          Bold Visions and Frontier Conditions – The Emergence of Film in San Francisco
2          “If I Had the Power to Do So I Would Destroy Them with My Own Hands” – Film and Politics in Post-Quake San Francisco
Part II: Chinatown Exhibition and Movie Theaters
3          “The Most Cosmopolitan City in the World” – Chinese San Francisco at the Turn of the Twentieth Century
4          “Eyes Darting Around, Spirit Dashing About” – Mapping Chinatown Film Culture, 1906 – 1915
5          The Chinesque Aesthetic -Orientalist Stereotypes in Post-Quake Film Culture
Part III: Chinese American Audiences
6          “Where the People Aren’t All American” – Chinatown Audiences and Spectators
7          Chinatown Modernity – Revolutions and Movie Theaters
8          Trajectories and Concluding Remarks
Bibliography
Index