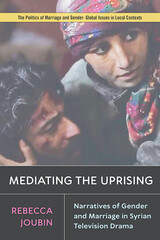 Mediating the Uprising: Narratives of Gender and Marriage in Syrian Television Drama shows how gender and marriage metaphors inform post-uprising Syrian drama for various forms of cultural and political critique. These narratives have become complicated since the uprising due to the Syrian regime’s effort to control the revolutionary discourse. As Syria’s uprising spawned more terrorist groups, some drama creators became nostalgic for pre-war days.

While for some screenwriters a return to pre-2011 life would be welcome after so much bloodshed, others advocated profound cultural and social transformation, instead. They employed marriage and gender metaphors in the stories they wrote to engage in political critique, even at the risk of creating marketing difficulties for the shows or they created escapist stories such as transnational adaptations and Old Damascus tales. Serving as heritage preservation, Mediating the Uprising underscores that television drama creators in Syria have many ways of engaging in protest, with gender and marriage at the heart of the polemic.
AUTHOR BIOGRAPHY
Rebecca Joubin is an associate professor and chair of Arab studies at Davidson College, North Carolina.
REVIEWS
“Mediating the Uprising expertly reveals how Syria’s most successful transnational media products have fared during and responded to the current conflicts. Rebecca Joubin displays uncommon dexterity in how she interlaces a wealth of detail, from knowledgeable insight into sociopolitical contexts to illuminating interviews with the musalsalat’s creative personnel. This approachable book will appeal just as much to specialized scholars as to a general readership wishing to learn more about how devastating geopolitical events take their toll on our media industries and their representations of gender.”
— Kay Dickinson, author of Arab Cinema Travels: Transnational Syria, Palestine, Dubai and Beyond

“A huge accomplishment, Mediating the Uprising combines smart readings of Syrian television miniseries with detailed ethnographic analysis. Joubin reveals the strategies of artists--both oppositional and regime-supporters--who are testing the limits of social and political expression, and the workings of an industry navigating seven years of civil war. The book is an invaluable addition to media studies and Syrian studies.”
— Edward Ziter, author of Political Performance in Syria: From the Six-Day War to the Syrian Uprising