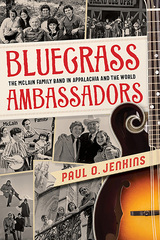 Bluegrass Ambassadors is the first book-length study of the McLain Family Band, which has spread the gospel of bluegrass for more than fifty years. Rooted in bluegrass but also collaborating with classical composers and performing folk, jazz, gospel, and even marches, the band traveled to sixty-two foreign countries in the 1970s under the auspices of the State Department. The band’s verve and joyful approach to its art perfectly suited its ambassadorial role. After retiring as full-time performers, most members of the group became educators, with patriarch Raymond K. McLain’s work at Berea College playing a particularly important role in bringing bluegrass to the higher education curriculum.

Interpreting the band’s diverse repertoire as both a source of its popularity and a reason for its exclusion from the bluegrass pantheon, Paul Jenkins advances subtle arguments about genre, criticism, and audience. Bluegrass Ambassadors analyzes the McLains’ compositions, recordings, and performances, and features a complete discography.
AUTHOR BIOGRAPHY
Paul O. Jenkins is the university librarian at Franklin Pierce University. He has written numerous articles on old-time and bluegrass music and is the author of Richard Dyer-Bennet: The Last Minstrel and Teaching the Beatles.
REVIEWS
“From humble beginnings in a small Appalachian hamlet to symphony stages around the world, the McLain Family Band has been a torchbearer for the music of America’s front porch. This is a story of a musical legacy, of passion and talent, of kind- ness and art wrapped in the magic of a family bond.”
Michael Johnathon, folk singer


Family Tree
Foreword
Preface
Acknowledgments
Introduction
1. Beginnings
2. Berea and Beyond
3. All in the Family
4. Going Classical
5. In the Studio
6. Rosemary’s Songs
7. On the Road
8. “My Name’s Music”
9. In the Classroom: The McLains as Educators
10. Celebrating Life and Fifty Years Together
Appendix A: Interpretations
Appendix B: Solo Recordings
Chronology
Discography
Notes
Bibliography