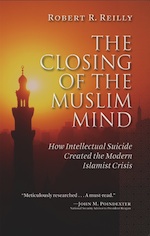 Islam’s Intellectual Suicide—and the Threat to Us All

People are shocked and frightened by the behavior coming out the Islamic world—not only because it is violent, but also because it is seemingly inexplicable. While there are many answers to the question of “what went wrong” in the Muslim world, no one has decisively answered why it went wrong. Until now.

In this eye-opening new book, foreign policy expert Robert R. Reilly uncovers the root of our contemporary crisis: a pivotal struggle waged within the Muslim world nearly a millennium ago. In a heated battle over the role of reason, the side of irrationality won. The deformed theology that resulted, Reilly reveals, produced the spiritual pathology of Islamism, and a deeply dysfunctional culture.

Terrorism—from 9/11, to London, Madrid, and Mumbai, to the Christmas 2009 attempted airline bombing—is the most obvious manifestation of this crisis. But Reilly shows that the pathology extends much further. The Closing of the Muslim Mindsolves such puzzles as:

·        why scientific inquiry is nearly dead in the Islamic world

Delving deeper than previous polemics and simplistic analyses, The Closing of the Muslim Mindprovides the answers the West has so desperately needed in confronting the Islamist crisis.

WHAT THEY ARE SAYING

"The lack of liberty within Islam is a huge problem. Robert Reilly’s The Closing of the Muslim Mind shows that a millennium ago Muslims debated whether minds should be free to explore the world—and freedom lost. The intellectual history he offers helps to explain why Muslim countries fell behind Christian-based ones in scientific inquiry, economic development, and technology. Reilly provides astonishing statistics . . . [and] also points out how theology prefigures politics."
—World Magazine

"As Robert R. Reilly points out in The Closing of the Muslim Mind . . . the Islamic conception of God as pure will, unbound by reason and unknowable through the visible world, rendered any search for cause and effect in nature irrelevant to Muslim societies over centuries, resulting in slipshod, dependent cultures. Reilly notes, for example, that Pakistan, a nation which views science as automatically impious given its view that an arbitrary God did not imprint upon nature a rational order worth investigating, produces almost no patents."
—American Spectator

"What happened to moderate Islam and what sort of hope we may have for it in the future is the subject of Robert Reilly’s brilliant and groundbreaking new book. The Closing of the Muslim Mind is a page-turner that reads almost like an intellectual detective novel...One thing Reilly’s account makes clear: Only when we move beyond the common platitudes of our contemporary political discussion and begin to deal with Islam as it really is — rather than the fiction that it is the equivalent of our Western culture dressed up in a burqa — will we be able to help make progress in that direction." —National Review Online

Robert R. Reilly is a senior fellow at the American Foreign Policy Council and has written for the Wall Street Journal, the Washington Post, Reader’s Digest, and National Review, among many other publications. A former director of the Voice of America, he has taught at the National Defense University and served in the White House and the Office of the Secretary of Defense. Reilly is a member of the board of the Middle East Media Research Institute and lives near Washington, D.C.

TABLE OF CONTENTS
Contents
Foreword by Roger Scruton
Introduction: Intellectual Suicide
1. The Opening: Islam Discovers Hellenic Thought
2. The Overthrow of the Mu‘tazilites: The Closing Commences
3. The Metaphysics of the Will
4. The Triumph of Ash‘arism
5. The Unfortunate Victory of al-Ghazali and the Dehellenization of Islam
6. Decline and Consequences
7. The Wreckage: Muslim Testimonials
8. The Sources of Islamism
9. The Crisis
Notes
Further Reading
Acknowledgments
Index