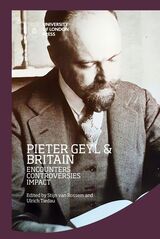 Pieter Geyl (1887—1966) was undoubtedly one of the most internationally renowned Dutch historians of the twentieth century, but also one of the most controversial. Having come to the United Kingdom as a journalist, he started his academic career at the University of London in the aftermath of World War I and played an important role in the early days of the Institute of Historical Research. Known in this time for his reinterpretation of the sixteenth-century Dutch Revolt against the Habsburgs that challenged existing historiographies of both Belgium and the Netherlands but was also linked to his political activism in favor of the Flemish movement in Belgium, Geyl left his stamp on the British perception of Low Countries history before moving back to his country of origin in 1935. Having spent World War II in German hostage camps, he famously coined the adage of history being “a discussion without end” and reengaged in public debates with British historians after the war, partly conducted on the airwaves of the BBC. A prolific writer and an early example of a public intellectual, Geyl remains one of the most influential thinkers on history of his time. The present volume reexamines Geyl’s relationship with Britain (and the Anglophone world at large) and sheds new light on his multifaceted work as a historian, journalist, homme de lettres, and political activist.
AUTHOR BIOGRAPHY
Stijn van Rossem is a postdoctoral fellow at the Institute of Historical Research. He is a professor at the School of Arts, Ghent, and the Plantin Institute of Typography in Antwerp. Ulrich Tiedau is a senior lecturer in the Department of Dutch and associate director of the Centre for Digital Humanities at University College London. He is coordinating editor of Dutch Crossing: Journal of Low Countries Studies and co-convenor of the IHR Low Countries History seminars.
TABLE OF CONTENTS

3. Pieter Geyl and Émile Cammaerts: the Dutch and Belgian chairs at the University of London between academia and propaganda, 1914–1935
Ulrich Tiedau

8. ‘It is a part of me’: The literary ambitions of Pieter Geyl
Wim Berkelaar

7. Pieter Geyl and the Idea of Federalism
Leen Dorsman

11. Between Leuven and Utrecht: the Afterlife of Pieter Geyl and ‘Greater Netherlands’
Fons Meijer