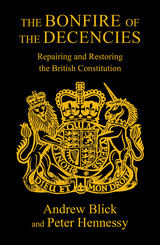 The British constitution matters. Its observance is crucial to the well-being of all our people, to every state activity and deployment of government power. It is fundamental to sustaining the decencies of British public and political life. These in turn are crucial to the face our society presents to itself and, therefore, to the culture, character, calibre, and influence of our nation.

Yet mechanisms for the upholding of constitutional principles in the United Kingdom are deficient and require an overhaul, argue Blick and Hennessy. The experience of Boris Johnson’s premiership between 2019 and 2022 provides the focus for their exploration of this subject. From the outset, Johnson’s tenure was a source of serious disruption, which saw standards and integrity compromised and constitutional values violated.

Eventually, his own colleagues turned on Johnson. But the problems do not end with his removal. They are part of longer-term tendencies in the UK, and of a worrying international trend towards the weakening of democracy. In this book, Blick and Hennessy analyse the pre-existing vulnerabilities that Johnson exposed in the UK system of government, ending with a series of proposals to repair the damage done and to prevent a repetition of this anxious episode in our political history.
REVIEWS
‘… if you are interested in the codes and rules that constitute the ethical plumbing of the constitution, and how they were trashed by Johnson, then this is the book for you.’
The Guardian


‘Andrew Blick and Peter Hennessy unflinchingly tell it like it is.’
The House Magazine


Introduction 1
Part One: The Nature of the Problem 5
Part Two: The Problem in Detail 83
Part Three: Recommendations and Conclusion 119
Appendices 147
Notes 173