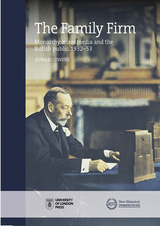 The Family Firm presents the first major historical analysis of the transformation of the royal household’s public relations strategy in the period 1932-1953. Beginning with King George V’s first Christmas broadcast, Buckingham Palace worked with the Church of England and the media to initiate a new phase in the House of Windsor’s approach to publicity. This book also focuses on audience reception by exploring how British readers, listeners, and viewers made sense of royalty’s new media image. It argues that the monarchy’s deliberate elevation of a more informal and vulnerable family-centred image strengthened the emotional connections that members of the public forged with the royals, and that the tightening of these bonds had a unifying effect on national life in the unstable years during and either side of the Second World War. Crucially, The Family Firm also contends that the royal household’s media strategy after 1936 helped to restore public confidence in a Crown that was severely shaken by the abdication of King Edward VIII.
AUTHOR BIOGRAPHY
Edward Owens is lecturer in modern history at the University of Lincoln. He is interested in how innovations in media technologies helped appeal popular sensibilities and the implications these relationships had on conceptions of citizenship and national identity.
REVIEWS
"A vibrant and welcome study of the monarchy’s early interaction with the mass media … An important insight into how British royalty has been adept at making itself a powerful, popular, and frequently uncontested presence."
-Twentieth-Century British History


"The royal family, famous for its inscrutability, has more than met its match in this resourceful young historian"
-Reviews in History


"Owens’s research is impressively resourceful and wide, and his interpretation is appropriately rich... This book is valuable for understandings of the twentieth-century British monarchy."
-English Historical Review


Introduction Part 1: Setting the scene  1.‘All the world loves a lover’: the 1934 royal wedding of Prince George and Princess Marina  2.‘A man we understand’: King George V’s radio broadcasts Part 2: The family firm falters 3.‘This is the day of the people’: the 1937 coronation 4.‘They’re only figureheads’: the royal family at war Part 3: Royal renaissance 5.‘A happy queen is a good queen’: the 1947 royal love story 6.‘This time I was THERE taking part’: the television broadcast of the 1953 coronation Conclusion