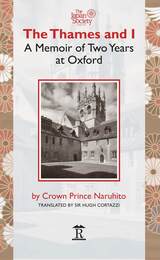 BUY
The Thames and I: A Memoir by Prince Naruhito of Two Years at Oxford
by Naruhito
translated by Hugh Cortazzi
Amsterdam University Press, 2019
eISBN: 978-1-898823-99-5
Prior to becoming Crown Prince of Japan in 1989, following the death of his grandfather Emperor Showa, Prince Naruhito studied at Merton College, Oxford, from June 1983 to October 1985. His research topic was the River Thames as a commercial highway in the eighteenth century. This marked the first time that anyone in direct succession to the throne had ever studied outside Japan. In 1992, he published a record of his time at Oxford under the title Thames no tomo ni . The memoir, which includes a colour plate section incorporating photographs taken by the Prince, explores his daily life, studies and recreational experiences, including discovering beer and being banned from entering a disco because he was wearing jeans. The Thames and I is a remarkable record, not least because of its candour, but equally because it reveals the Crown Prince as an individual, including his personal charm and sense of humour. It will be of special interest to those wishing to know more about the future emperor of Japan.
TABLE OF CONTENTS

Foreword to the Paperback edition by David Warren

Preface to the Japanese edition (1992)

Life in the ambassador’s residence

Excursion by the Thames

I move to Colonel Hall’s

Life in the Hall household

Second visit to Oxford and call at Professor Mathias’s house

Last month at the Halls

‘Town and Gown’ – A brief history of Oxford University

Education at Oxford and regular activities in the University

Shopping and the English character

Visits to places associated with musicians: England and music

8. Life as a Research Student at Oxford:

Canals past and future

9. Travels in Britain and Abroad:

Weekend drives in the countryside and around Oxford

The English people as I saw them