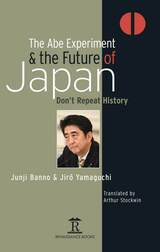 BUY
The Abe Experiment and the Future of Japan: Don’t Repeat History
by Junji Banno and Jiro Yamaguchi
Amsterdam University Press, 2016
eISBN: 978-1-898823-38-4
With an author’s Foreword written on the day that the Abe cabinet decided to ‘revise the Japanese Constitution by reinterpretation’ (Tuesday, 1 July 2014), this timely examination of Japan’s post-war history by two leading historians committed to democratic politics is highly instructive and prompts serious reflection by anyone concerned with the future of Japan. Originally published in Japan by Iwanami Shinsho, The Abe Experiment and the Future of Japan, records a wide-ranging dialogue between two eminent Japanese scholars – Junji Banno, a political historian, and Jir? Yamaguchi, a political scientist – regarding Japan’s modern political history. The focus of the conversation is on what they perceive as disturbing parallels between the 1930s and the recent policy trajectory of the Abe government, in which relations with Japan’s immediate neighbours have seriously deteriorated. The translation is by the distinguished Oxford scholar and author Arthur Stockwin, formerly Director of the Nissan Institute.
AUTHOR BIOGRAPHY
Professor Junji Banno was born in Yokohama in 1937. In 1963, he graduated from the Department of Japanese history within the Faculty of Humanities. He was appointed Professor at the Institute of Social Science of Tokyo University.
TABLE OF CONTENTS


Foreword by Yamaguchi Jir? Translator’s Preface Conventions Chapter 1. Should the Aim be to Prevent Constitutional Revision? • From a letter written four years ago • The deep historical roots of anti-Japanese feeling in China • ‘Japan-China friendship’ as an ongoing concern • Do we want to have a pretend war? • Can we fight for constitutionalism? • The difference between ‘cabinet politics’ and ‘politics based on the people’ • Should we rely on shifting public opinion? Chapter 2. Why was Post-war Pacifism Defective? • Why the roots of ‘peace’ are shallow • Who did Japan lose to? • Japan remains outside the world of victorious nations • ‘Peace’ in post-war democracy • Turning point after the Cold War Chapter 3. Is there a Political Elite in Japan? • If an anti-system elite holds power • The present Prime Minister is part of the anti-system elite • Why does a rational elite not emerge? • The rationale of breaking through popular consciousness Chapter 4. Is the Liberal Democratic Party Really Tough? • One aspect of conservatism: native conservatism • A second aspect of conservatism: liberal conservatism • The rallying of pre-war conservative forces • The light and shade of the LDP pursuit of equality • Scenario of a two-stage revolution • Have they mixed up principle and policy? • Strength and weakness of party adherence • Is the Abe Government as firm as a rock? • The possibility of liberalism plus social democracy Chapter 5. Why Can’t We Tackle Reduction in Inequalities? • Why is social democracy weak in Japan? • Differences brought about by war • The ‘age of the new middle class’ also existed in the pre-war • The problem of diversity and poverty has suddenly appeared. • Japan’s modern history of samurai, peasants, artisans and merchants • Why did the Democratic Party line of giving highest priority to welfare fail? • The Japanese left wing likes small government Chapter 6. Where Should Japan Go From Here? • How should we regard Abe politics? • Freedom is dangerous • A two-party system without social classes won’t work • Directionless Japan • Japan-China friendship, and international co-operation, once again • A society in which everybody can lead lives befitting human beings • Problems of raising an elite that can oppose Afterword by Banno Junji Index