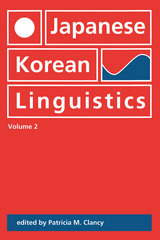 Japanese and Korean are typologically quite similar, so a linguitic phenomenon in one language often has a counterpart in the other. The papers in this voulme are intended to further collective and collaborative research in both languages.

Patricia Clancy is associate profressor in the Department of Linguistics at the University of California at Santa Barbara. She is the author of The Acquisition of Japanese.
TABLE OF CONTENTS
Cover
Contents
Foreword
Part I: Discourse and Pragmatics
On the Clause-Linking to Construction in Japanese
Functional Transfer in the History of Japanese Language
Topicality in Korean Conversation: A Conversation Analytic Perspective
Linguistic Politeness and Cultural Style: Observations from Japanese
Idiomatic Conditionals in Japanese
Cognition, Affect, and Topicality of the Causal Particle -Nikka in Korean
The Korean Modal Marker Keyss as a Marker of Affect: An Interactional Perspective
Part II: Phonology
The Phonological Word in Korean
Prosodic Approach on Korean Partial Reduplication
Prosodic Word-Level Rules in Korean
A Phonetically Based Analysis of [Voice] and [Fortis] in Korean
Part III: Psycholinguistics and Language Acquisition
Conditionality and Deontic Modality in Japanese and Korean: Evidence from the Emergence of Conditionals
Word Order vs. Word Class: Portmanteau Sentences in Bilinguals
Development of Locative Case Markers in Korean
The Organization of the Korean Syllable: Experimental Evidence
The Acquisition of the Japanese Subject Marker Ga and its Theoretical Implications
Processing of Japanese Relative Clause Constructions
Part IV: Syntax and Semantics
Indefinite Wh Pronouns and the Morpheme Mo in Japanese
Scrambling and Scope in Japanese
A Note on So-Called "Donkey Sentences" in Japanese: A Preliminary Study
Part V: Syntax and Morphology
Inalienable-Type Multiple Accusative Constructions in Korean and Japanese
Case-Motivated Movement to Non-Argument Positions: Evidence from Japanese
The Role of Pro in the Ni Passive in Japanese
On Certain Differences in Comparative Deletion Between English and Japanese
Inalienable Possession Constructions in Korean: Scrambling, the Proper Binding Condition, and Case-Percolation
Modal Phrase and Adjuncts
Postverbal Adverbs and Verb Movement in Korean
The Syntax of Serialization in Korean
Case Alternation and Word Order Variation in Nominal
Uniform Pro Subject Analysis of Japanese Sentences
Index
Back Cover