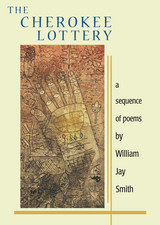 The Cherokee Lottery: A Sequence of Poems
by William Jay Smith
Northwestern University Press, 2000
Paper: 978-1-880684-66-5
For the first time in poetic form, The Cherokee Lottery treats one of the greatest tragedies in American history, the forced removal of the Southern Indian tribes east of the Mississippi. When gold was discovered on Cherokee land in northern Georgia in 1828, the U.S. Government passed the Removal Act, and 18,000 Cherokees, along with other southern tribes—Choctaws, Chickasaws, and Creeks—were forcibly relocated to Oklahoma territory. Herded along under armed guard, they traveled in bitter cold weather and as many as a quarter died on what became known as "The Trail of Tears."

In powerful poetry of epic proportions, which Harold Bloom has called his best work, Smith paints a stark and vivid picture of this ordeal and its principal participants, among them Sequoyah, the inventor of the Cherokee alphabet, and Osceola, the Seminole chief.

AUTHOR BIOGRAPHY
William Jay Smith (born 22 April 1918) was an American poet. The author of ten collections of poetry, he was appointed the nineteenth Poet Laureate Consultant in Poetry to the Library of Congress from 1968 to 1970. His work appeared in both Harper's Magazine and The New York Review of Books, and he was a member of the American Academy of Arts and Letters from 1975 until his death in 2015.


Journey to the Interior
The Eagle Warrior: An Invocation
The Cherokee Lottery
The Trail
The Talking Leaves: Sequoyah's Alphabet
Old Cherokee Woman's Song
The Crossing
The Pumpkin Field
The Buzzard Man
Christmas in Washington with the Choctaw Chief
At the Theater: The Death of Osceola
The Players
The Choctaw Stick-Ball Game
Song of the Dispossed
The Buffalo Hunter
Sitting Bull in Serbia
The Burning of Malmaison
The Artist and His Pencil: A Search for the Purebloods
Full Circle: The Connecticut Casino
Acknowledgments and Notes
Picture Credits