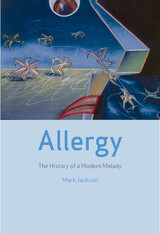 BUY FROM
Allergy: The History of a Modern Malady
by Mark Jackson
Reaktion Books, 2007
eISBN: 978-1-86189-600-1
Cloth: 978-1-86189-271-3
Paper: 978-1-86189-333-8
It attacks through foods, animals, and innumerable chemical combinations. It is among the most common and potentially lethal afflictions known. It is the allergy, the subject of Mark Jackson’s fascinating chronicle.
Jacksoninvestigates how the allergy became the archetypal “disease of civilization,” as it transformed from a fringe malady of the wealthy into one of the greatest medical disorders of the twentieth century. Jackson also examines the social and economic impact of the allergy, as it catalyzed a new health-conscious culture and created the wealth of some of the largest companies in the world today. Whether cats, crabgrass, or cheese is the source of your daily misery, Jackson’s engaging and in-depth account is an invaluable addition to every bookshelf.
AUTHOR BIOGRAPHY
Mark Jackson is professor of the history of medicine and director for the Centre for Medical History at the University of Exeter. He is the author of several books, including The New-Born Child Murder and The Borderland of Imbecility.
REVIEWS
"Splendidly done."
— J. Matthew Sleeth, Books & Culture