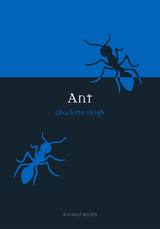 Ants are legion: at present there are 11,006 species of ant known; they live everywhere in the world except the polar icecaps; and the combined weight of the ant population has been estimated to make up half the mass of all insects alive today.

When we encounter them outdoors, ants fascinate us; discovered in our kitchen cupboards, they elicit horror and disgust. Charlotte Sleigh’s Ant elucidates the cultural reasons behind our varied reactions to these extraordinary insects, and considers the variety of responses that humans have expressed at different times and in different places to their intricate, miniature societies. Ants have figured as fantasy miniature armies, as models of good behavior, as infiltrating communists and as creatures on the borderline between the realms of the organic and the machine: in 1977 British Telecom hired ant experts to help solve problems with their massive information network.

This is the first book to examine ants in these and many other such guises, and in so doing opens up broader issues about the history of science and humans’ relations with the natural world. It will be of interest to anyone who likes natural history or cultural studies, or who has ever rushed out and bought a can of Raid™.

'Sleigh begins with an overview of what myrmecologists believe today. But it's the various fears, fascinations and prejudices of laypersons with which Sleigh is concerned for the bulk of this very readable book.' - Independent on Sunday

'Even more impressive is Charlotte Sleigh's Ant, which makes clear how moralised interpretations of ant society have supported "Victorian platitudes, socialist utopias and Nazi eugenics". Ant imagery has featured in debates about colonialism, slavery and immigration.' - The Independent