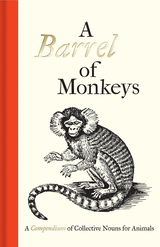 A Barrel of Monkeys: A Compendium of Collective Nouns for Animals
compiled by Samuel Fanous
Bodleian Library Publishing, 2015
Cloth: 978-1-85124-445-4
What should we call the wild animals we spot from our windows? A surfeit of skunks? A dray of squirrels? A patient watch of wildlife enthusiasts might even catch sight of a skulk of foxes or a scavenging sloth of bears. The practice of inventing collective nouns for animals is an ancient pastime which derives from medieval hunts, but the list has been augmented in every age—and it remains an entertaining pastime today.

A Barrel of Monkeys brings together more than one hundred collective nouns for animals, from a bloat of hippopotamuses to a caravan of camels, a tower of giraffes, and a leap of leopards. The rivalry between male rhinoceroses becomes especially apt when the rowdy ungulates are characterized as a crash of rhinos.  An ambush of tigers is an apt characterization of the skillful hunters that silently stalk their prey. A blend of wordplay, puns, and alliteration, some of the terms collected here are now commonplace, like a pride of lions. Others aren’t heard much these days, but many—like a dazzle of zebras or a prickle of porcupines—richly deserve a comeback.

With charming illustrations by the eighteenth-century artist and naturalist Thomas Bewick, A Barrel of Monkeys is the perfect follow-up to A Conspiracy of Ravens, the Bodleian Library’s book of bird words. Not even a crash of rhinos can stop readers from smiling at this second collection.
AUTHOR BIOGRAPHY
Samuel Fanous is head of publishing at the Bodleian Library, University of Oxford.
REVIEWS
“Fanous marries a love of the English language with striking eighteenth-century engravings. . . . It’s difficult to select favorites but how about ‘a crash of rhinoceroses,’ ‘a mischief of mice,’ and ‘a piddle of puppies’? Each of about 125 collective nouns is paired with an illustration by Thomas Bewick, a famed naturalist engraver.”
— Boston Globe


A Barrel of Monkeys

A Compendium of Collective Nouns for Animals