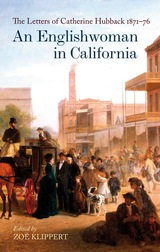 A niece of Jane Austen and a novelist herself, Catherine Hubback was fifty-two years old when she left England for America. She travelled to California on the Transcontinental Railroad and settled in Oakland, on the eastern shore of San Francisco Bay. Her son Edward shared her household and commuted by ferryboat to a wheat brokerage in the City.

In letters to her eldest son John and his wife Mary in Liverpool, Catherine conveys her delight – and her exasperation – at her new environment. She portrays her neighbours with a novelist's wry wit and brings her English sensibility to bear on gardening with unfamiliar plants and maintaining a proper wardrobe in a dry climate. She writes vividly of her adventures as she moves about a landscape recognizable to present-day residents, at a time when boats rather than bridges spanned the bay, and hot springs were the main attraction in the Napa Valley. In an atmosphere of financial unrest, she writes freely of her anxieties, while supplementing Edward's declining income by making lace and teaching the craft to other women. She recalls her 'prosperous days' in England, but finds pleasure in small things and assuredly takes her place in a society marked by great disparities in wealth.

In addition to transcriptions of the letters, this highly readable edition offers pertinent information on many of the people and places mentioned, explanatory notes, and striking illustrations. The introduction places the letters in context and tells the story of Catherine Hubback, whose life evolved in ways unprecedented in the Austen family.

Zoë Klippert is a freelance editor who lives in Moraga, California.