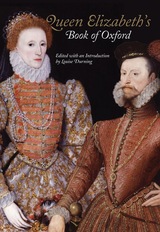 Newly translated, the book's Latin verse is written in a conversational tone as a lively discussion between the revered Queen and a knowledgeable guide. The volume also includes exquisite pen-and-ink drawings of Oxford's most famous buildings and an illuminating introduction by Louise Durning that places the text in its proper historical context. As Durning relates, Queen Elizabeth's Book of Oxford served several purposes, the most important of which was Oxford's interest in the Queen's potential patronage of a new college. Although Elizabeth never honored the request, she was eventually honored as the "founder" of Jesus College.

Queen Elizabeth's Book of Oxford offers a glimpse into the process of patronage during the fifteenth and sixteenth centuries. It will be treasured by scholars of Elizabethan history as well as by anyone interested in the historical development of universities around the world.
AUTHOR BIOGRAPHY
Louise Durning is principal lecturer in history of art in the School of Arts and Humanities, Oxford Brookes University. Her previous publications include Gender and Architecture, coedited with Richard Wrigley.
REVIEWS
"A treasure for scholars and renaissance buffs alike. It provides scholars with an opportunity to delve into a rare commemorative record of a specific Elizabethan event. . . . With the skills of the academic researcher and the instincts of a detective Durning outlines a most interesting case for the creation of the manuscript, the motives for its construction, and the processes of its development. . . . Well deserving of a recommendation to read and keep as a treasure."
— M. Wayne Cunningham, Renaissance Magazine