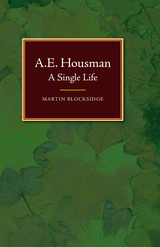 A.E. Housman's poetry (especially A Shropshire Lad) remains well-known, widely read, and often quoted. However, Housman did not view himself as a professional poet, always making quite clear that his 'proper job' was as a Professor of Latin. Housman's fame as a poet has often obscured the fact that he was the leading British classical scholar of his generation, and a Cambridge Professor. It has also sometimes been suggested that Housman's two areas of activity are the sign of a flawed or 'divided' personality. A.E. Housman: A Single Life argues that there is no fundamental tension between Housman the poet and Housman the scholar. His career is presented very much as that of a working academic who also wrote poetry. This book gives a full account of what Housman described as 'the great and real troubles of my early manhood,' and in particular his unrequited and life-long love for his undergraduate friend, Moses Jackson. The author is sceptical about Housman's reputed rudeness and misanthropy, pointing out that, though Housman was famously aloof in manner, he was notably loyal and generous, courteous in his daily dealings, and generally liked by those who knew him. He also possessed a highly developed sense of the absurd and a ready and often disconcerting wit, features which characterised, not only his letters and miscellaneous writings, but also, famously, much of his scholarly work. [Subject: Biography, Literary Criticsm]